People often ask how home educated children learn to read, and the answer is in as many different ways as there are children learning. Let me tell you about Tigerboy this week to demonstrate why I think that.

Tigerboy lives in a house (over) filled with books. He has free access to a wide number of resources, and shared access to things like computers, tablets and so on. He’s had an account on Reading Eggs (see affiliate link in sidebar for more info) for ages, and we’ve done a variety of montessori type activities from time to time. He has three elder siblings who have all learnt to read in very different ways at very different times. Oh, and in case you’re wondering how old he is, he was 5 at the start of the month, so would be in reception if he had gone to school. Scene set.

Two days ago I saw a tweet or Facebook post commenting that the iPad app of Teach your monster to read was free until Sunday (tomorrow). I’ll have that, I thought, found the educational iPad and charged it and set it up.

At some point during the day he came bouncing in to find me and I told him I had a new game for him. He likes games, so this was an instant hit, and he played for ages, with a minor blip when we thought he’d lost access to his monster and all his stuff (oh boy the wailing! ) but Big rescued it, and all was well again. 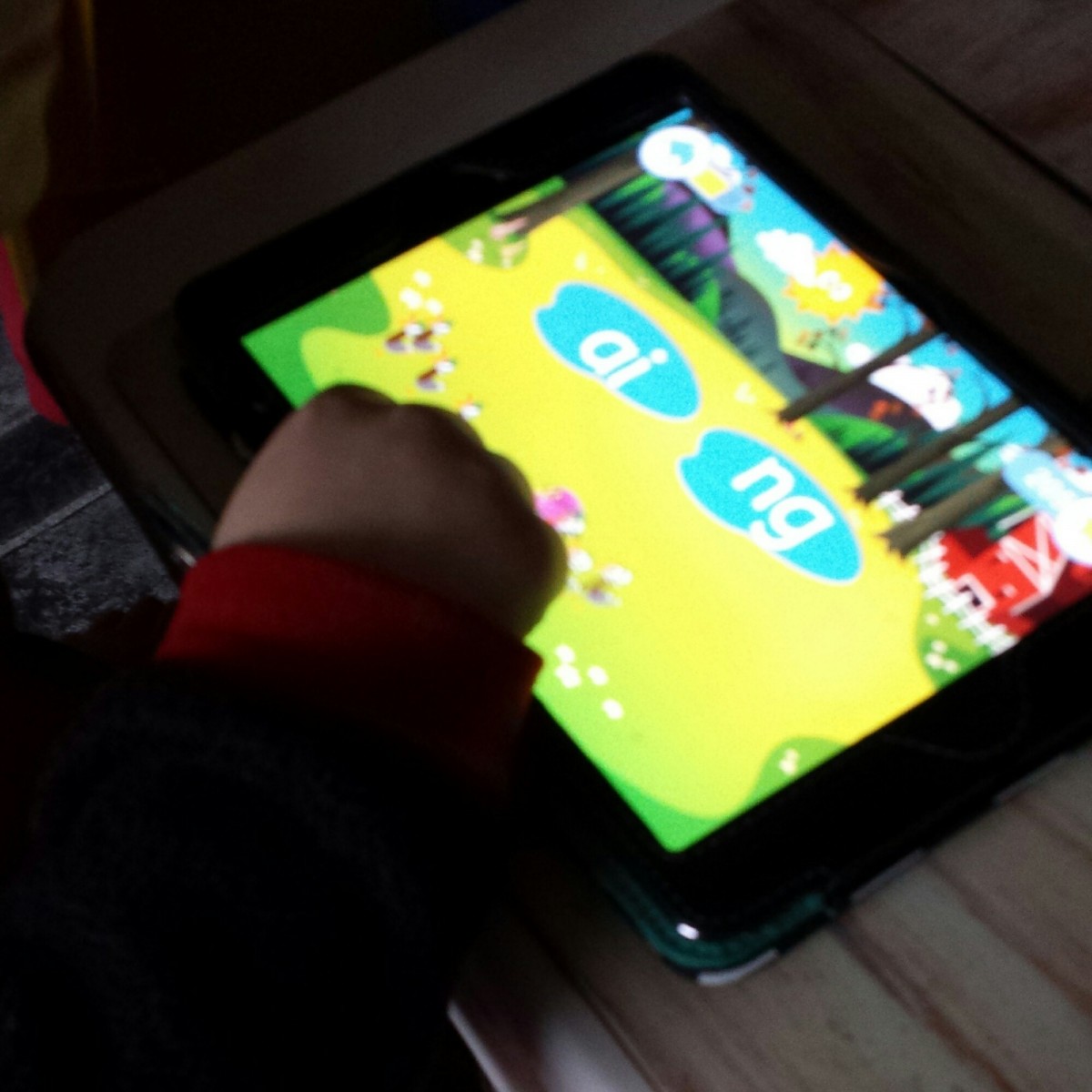 He sat next to me at the table for around three hours, with breaks for getting dressed, eating breakfast etc, then bounced off to do other things. And when I say sat, I mean jumped, balanced, perched, twisted, fidgeted etc etc. He’s rarely still even when utterly focused.

I was quite surprised to discover he had gone from asking me what letter made what sound and vice versa to being able to sound out all the words in quite long sentences. Ok, more than quite surprised, very surprised.

After his mammoth app session, he did a variety of other things for the rest of the day. Until at bedtime, after I’d read a picture book and a chapter of Harper and the Circus of Dreams, when he grumped that the book I’d read (Nibbles the book monster) was too hard for him to read for himself. I went and fetched a stack of Bob Books instead.

Bob books start off *very* easy. It’s still a massive boost of confidence for a child when they manage to read their first book, however short and simple it is, and he was thrilled when he managed to read the first one. So thrilled that he wanted the next, except I couldn’t find it so he had to jump to book six.

Didn’t phase him at all. This morning he picked up Teach your monster to read again and watching him play I realised that he was reading the instructions without needing to vocalise at all. Instructions like “I do not need the red hat”, she said. “Get me the black one.”

In montessori terms I think this would be described as a sensitive period – a time when all the pieces for a particular bit of learning have fallen into place, and the child has interest and focus and can develop amazingly rapidly. I’ve seen it happen with other children when I worked in a montessori nursery and school – I don’t think I’ve ever seen quite as drastic a leap in as short a time, but my children have never done anything by halves.

It’s entirely possible that someone in the next few days he’ll seem to lose interest in all this stuff for a while, that happens too, and while it’s incredibly frustrating from the outside I’ve learnt that if you try to push or pull at that point you just extend the period of disinterest. So I’ll be over here, sitting on my hands and doing my best to gently strew opportunities for him, as I do for the others.

So there you go. One child, binge learning to read, the way that suits him.

Details on the Teach your monster to read app offer here on Facebook. Bob books on Amazon (affiliate link).