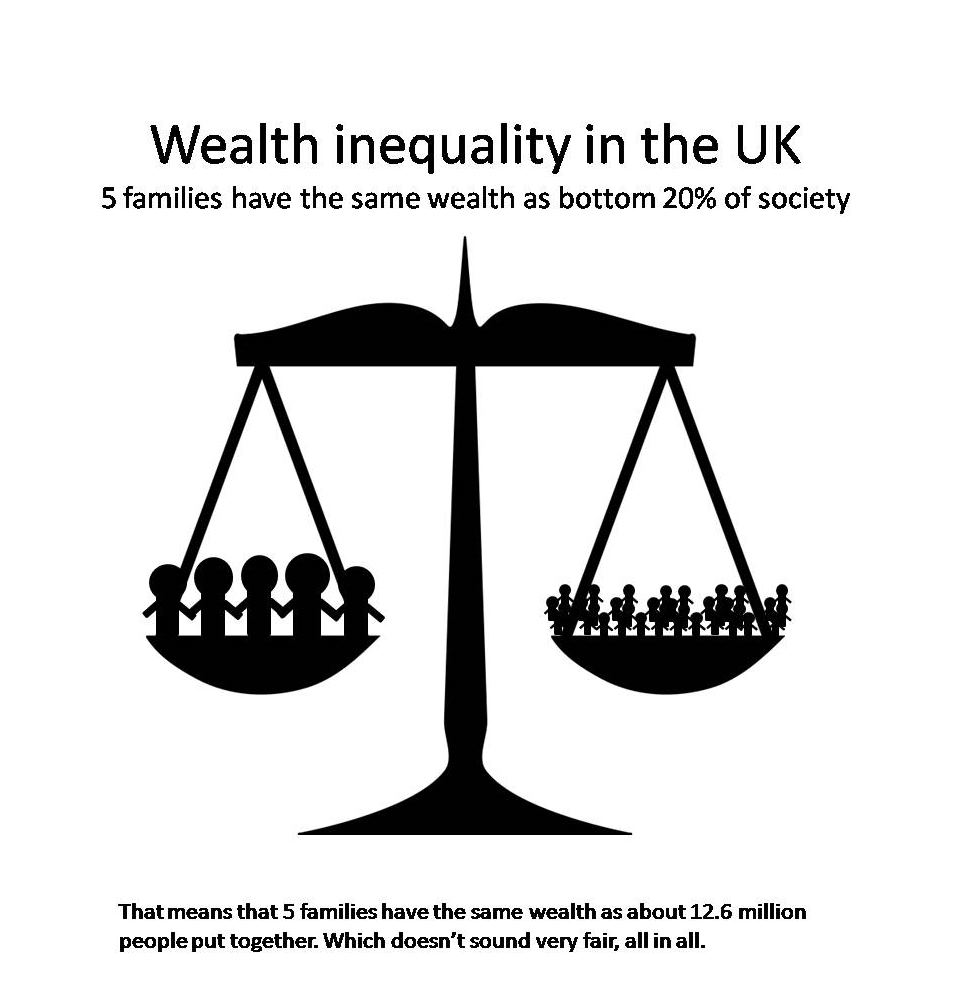 Seriously. 5 families are wealthier than 12.6 MILLION people put together.

Does this strike you as a good idea?

And it appears that the welfare state created after the second world war, to even out the chances of all of society, to provide health care, actual affordable housing instead of Affordable Housing™1 and education is being steadily eroded. We have a Conservative chancellor referring to National Insurance as a jobs tax. National Insurance was the contribution that people made towards getting benefits BUT not all benefits rely on contributing.

And quite frankly, that’s how it should be. Not everyone *can* contribute. And as a society, we look after the poor and the vulnerable. But right at the moment, with divisive rhetoric spilling from politicans’ lips and screaming from newspaper headlines, we seem to be forgetting that.

We seem to be forgetting that we could all pull together to make a stronger society. That each person has individual worth just by virtue of being an individual. (If you don’t believe that, I suggest you click away now, you’re wasting your time reading here.)

So yesterday, I tweeted a stream of consciousness.

As we watch the rich and powerful work to further divide society and convince people to turn on each other can I recommend @Harryslaststand?

read the book this weekend. It's more than a memoire, it's an overview of a life spanning 91 years of history. Covers growing up in poverty>

War, love, and watching as our country banned together after a period of absolute inequality to provide welfare state, housing and education

We can learn much from the past but the most important lesson is that we shouldn't allow rich greedy people to return us there.

No one has an absolute right to riches and wealth, accident of birth should not damn a child to a short and painful life.

I am not sure I agree with Harry on all his suggestions, but I definitely agree that we should not stand by and do nothing.

Personally I favour #basicincome supported by land value tax and Tobin tax. I favour recognising worth of every individual.

And as a response to that last tweet, mentioning Basic Income, I got “you mean we who work should pay taxes to support those who could work but chose not to?”

Seriously. That’s your takeaway from my stream?

I’d point out that I was recommending land value tax and tobin tax, neither of which are income based taxes. And in Basic Income trials around the world, there was a very small drop in employment – mainly students who remained in education, and new mothers who spent time with their children. In both cases those are long term investments that will pay off – the student will be better educated, and better able to support themselves in future. The mother will be healthier, and her children happier and healthier, and again, more likely to be better members of society. (If you subscribe to the theory all children should be in institutional child care from the word go, jog on.)

I’m talking about having an enlightened discussion on how we can pull together as a society instead of behaving like a wolf pack and turning on the weakest to drive them out.

So, if you want to have that discussion, pull up a chair. Otherwise, there’s a big red x somewhere in your browser that will work really well as an exit.

Angry? Yes, actually, I am. I’m furious that it’s next to impossible to find out the truth of what’s going on all around us, with having to unpick propaganda and bias from every bit of information I find. I’m mad as hell that this country is sitting back and letting an out of touch parliament turn us against each other, while the European parliament works on legislation that will make it illegal NOT to privatise the NHS. (TTIP. Look it up. Fight it. Tell your MP and your MEP you’ve heard of it, you don’t want it, and you’re watching them.)

What are we doing? I feel like apologising to Harry Leslie Smith and the memory of all those men and women who died in WWII fighting for our freedom. For a while, we were working on a better society. It was never perfect, but it was heading in the right direction. What do we do to reverse the rot?

1Please note, to the best of my knowledge, the government has NOT trademarked Affordable Housing. It would help if they did, as it would eradicate confusion between their meaning and the original meaning of the words. Did you know that Affordable Housing is defined in relation to the median income in society? No, neither did I until this week. The median salary, incidentally is the middle, and it’s a whole lot higher than the mean (average) salary. Don’t you love newspeak and statistics?