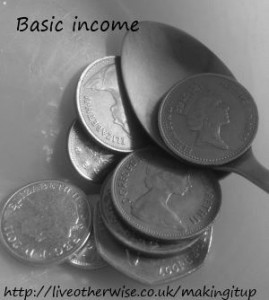 Click on the image to see other posts in this series

There are various criticisms levelled at the basic income whenever it is proposed, not least that it’s unaffordable. I’ve given some suggestions on that in the past, but today I want to look at what other people raise as faults in the system.

One of the concerns is that if people are receiving a basic income, lots will give up work. Supposedly this, alongside the fact that there was a higher level of divorce, is one of the reasons quoted as to why the basic income trial in America was discontinued.

I’ve found a number of books and articles discussing the amount of time people cut down on their working. It’s important to note that people knew that this was an experiment, not a permanent state of affairs, so some people may well have maintained jobs they’d otherwise have given up, while others took advantage of leisure time knowing that it wasn’t for ever. Even with that said, people reduced their work patterns by very small percentages – up to 5% for unmarried women. There’s some fascinating discussion of it around Page 99 in this book Ethics and Economics of the Basic Income Guarantee.

This talks about people cutting their hours from 65 to 60. I’d maintain that a system expecting people to work 65 hours a week to be able to survive financially is a pretty rotten system. Is it possible that a basic income might actually do something to rectify that type of situation – might give people a stronger bargaining position to be able to stand up to this type of exploitation?

It is exploitation, expecting people to work that kind of pattern. And it doesn’t do anyone any good. Working longer hours reduces productivity and increases stress levels and sickness. If basic income went some way to cutting back on that, it could only be a good thing.

But this article is supposed to be the case against basic income. So what about the situation where there were higher numbers of divorces?

Well, I tried to research this further as it’s frequently cited as a reason why the basic income experiments were discontinued. But it seems that this particular finding may have been over exagerrated:

Additionally, contrary to prior findings on GAI, which claimed it increases fertility, improves birth outcomes, and causes divorce, Dauphin data from 1974-79 showed:

• No increase in fertility, but weak evidence of delayed childbirth

• No evidence of increased divorce

(From The Town with No Poverty: Health Effects of Guaranteed Annual Income)

So, two major reasons why basic income raises concerns are dismissed as not really being concerns at all. The cost implications are obvious, but I think insufficient reason to dismiss it as a way forward. Granted there are people who stand to make very little from the implementation, and they are also the people who would lose control to a large extent of a compliant workforce – is this the real reason that basic income isn’t up for debate? Because of the effect it would have on a section of society currently running scared?

Basic income is an idea whose time has come, and the more of us that discuss it, research it, and promote it, from all sides of the political spectrum, the better.