If we’d gone house hunting when we moved down here, we’d have never chosen this house. It’s far too small for our growing family. But if we’d bought a house that suited us, instead of inheriting this, we probably wouldn’t have got the rather wonderful garden this one has.

It surrounds the house on three sides. We’ve got lots of grass at the moment, good for small children to run around and blow bubbles. 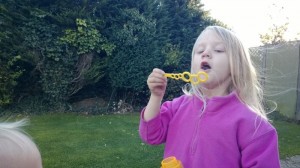 But we could do so much more with it.

I’d love to have a playset that has everything in it. Like this Activity Toys Direct one although realistically it’s a bit big. Maybe the version without the swings would be better. Plus then I wouldn’t be worrying about small children walking into swings.

Ooh, or this forest lodge is nice. And still has a slide – Tigerboy loves slides. That wouldn’t take up hugely too much garden – we still need room to pitch a tent or two to dry them out after camping after all 😉

The main thing I dream about to be honest, is ripping out the nasty conifers, and replacing them with fruit trees. 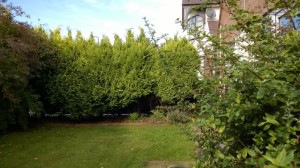 This is the bit of the garden that fronts onto the busiest road we adjoin. Which isn’t precisely busy, but twice a day is thronged with school children on their way to and from the local junior school. We don’t tend to sit out there, and I’d love to gradually turn it into a forest garden, something that supplied us with food, with minimal effort. I’m not really into effort where gardening is concerned 😉 So replacing the conifers (and the unused path behind them that’s supposed to lead to the back door and doesn’t) with a couple of rows of espalliered fruit trees would be a fantastic start to that dream. As they cost nearly £50 each for pretrained ones, three would be a great start.

Big has much the same thoughts for that part of the garden. I told her what I was doing, and she set to and produced her own plan. She’d get the rest of the plant money for herbs. 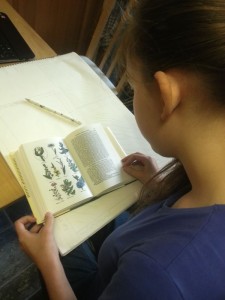 That’s culpepper herbal she’s using. When she was in the stillroom this summer she started learning what herbs can be used for, as well as just cooking, and now she wants to fill sunny beds with herbs. Which sounds pretty good to me. Especially if we can include some Mary’s gold – lovely flowers and good for stings and bites of all kinds. 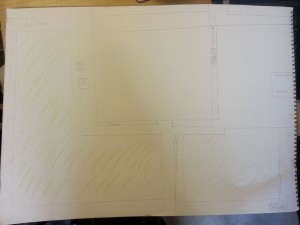 I hope you can read it – it’s worth expanding if you can’t.

It does rather gloss over the very worst part of the garden though – the shed aisle.

I hope you can make it out. It’s a slightly odd photo as it’s a panorama shot of the back expanse that leads to the sheds. (There are two, but one is round the corner, the picture got broken in the middle and is showing two instead of one. Sigh.) This is a dark bit – there’s trellis to one side and the walkway to the back of the garage is closed over. I’d like to do something with this, but I don’t really know what. It would be a great area for chickens if all the unwanted shrubs were taken out and replaced with an eglu and run I suppose. Or maybe some kind of long thin climbing frame area? It just seems so unloved and wasted right now which is a shame.

In the very long term I’d love to put a conservatory on the patio end of the house, and grow a vine in it. Might mean switching the rooms around as this end is the bedrooms, and it would make more sense to have a conservatory on a living room really. But that’s a retirement plan I suspect, when children are grown and spread their wings. For now I’d just love to be able to use the garden more effectively for them. All of them. From Tigerboy scrambling about, to giving Big (she’s nearly 14!) her herb beds. And if I could end up with a swinging garden chair to read it while I watched over them all, it would be perfect.

This blog post is an entry into the Tots100/Activity Toys Direct garden makeover competition.