The holy grail of parenting/ meal planning – a meal you can serve up that everyone will eat. Doesn’t happen often in this house. I’ve got two children who are dubious about mixed/ wet foods (bolognese bearable to one, not the other). Tigerboy is relatively straightforward but likes to eat one thing at a time and is suspicious of a lot of vegetables. Spicy foods make the smaller children cringe. And so on, and on.

It’s a challenge. I meal plan and shop once a week, and as well as trying to balance nutritional requirements there’s also the juggling act of who is in when (karate, computer club, swim teaching, fencing….) and trying to get small children to bed at a reasonable hour. I’ve got a chart. Seriously. It’s about the only way I can visualise it all. I do make things more difficult for myself at times by trying to do a lot of cooking from scratch , and that’s a swings and roundabouts thing too. It’s cheaper, and I can have more control over what we’re eating, but it’s time and effort consuming too.

Anyway, to that meal I mentioned. I’d been challenged by Foodies100 to incorporate Cypriot New potatoes from Tesco into a meal, and come up with something delicious. Challenge accepted 😉 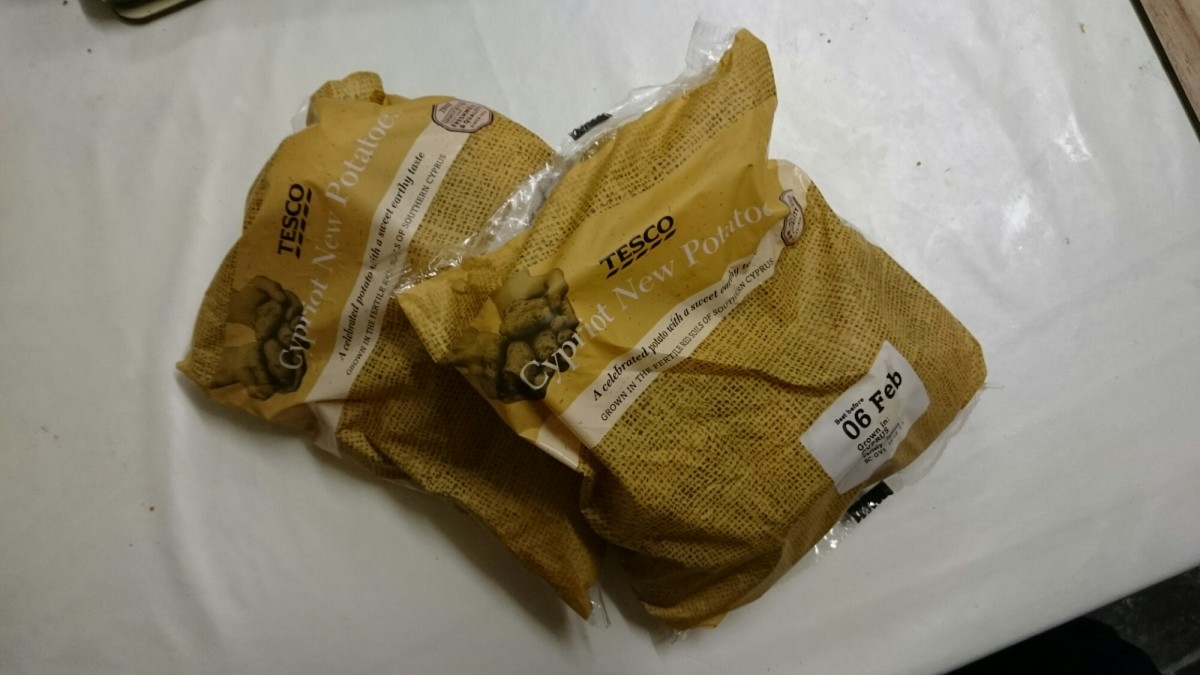 Cypriot New potatoes are available in Tesco now until the end of March, and they’re really easy to deal with. Some shops carry them loose – our local one had them in these handy 750g bags, ideal to feed a family of 6 it turns out.

I gave the potatoes a quick wash, then parboiled them in their skins for 10 minutes, while making a cheese sauce and heating the oven to around 200 deg C. Then the white sauce went in one dish over some raw cauliflower, and the potatoes went in a preheated dish of cold pressed rape seed oil – I tossed them carefully in the hot oil to make sure they were well coated, and then ground sea salt over them for that finishing touch.

The whole lot went in the oven to roast for around 40 minutes, and at the last minute I did a stir fry veg selection to go alongside the cauliflower cheese and roast potatoes.

I was very pleased with how the roast potatoes turned out. They were a little crispy and the salt just brought out the flavour. 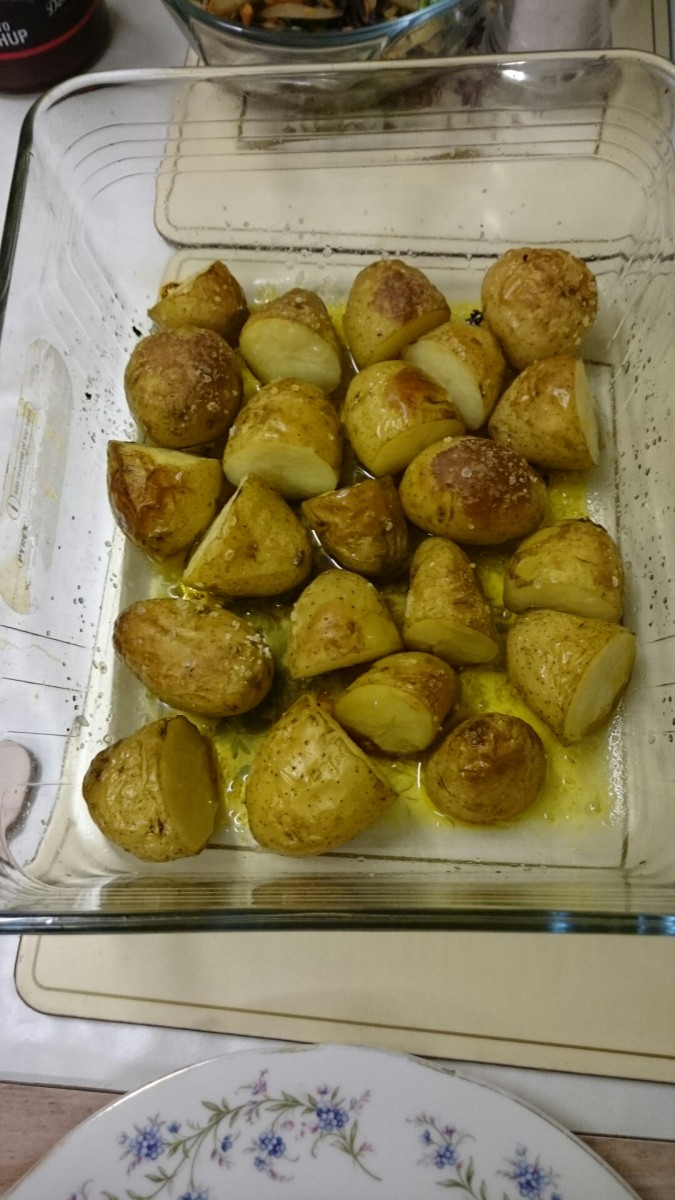 They looked good too.

And what’s more, every member of my picky little family ate them. Do you know how rare that is? To find something that every person will eat?? 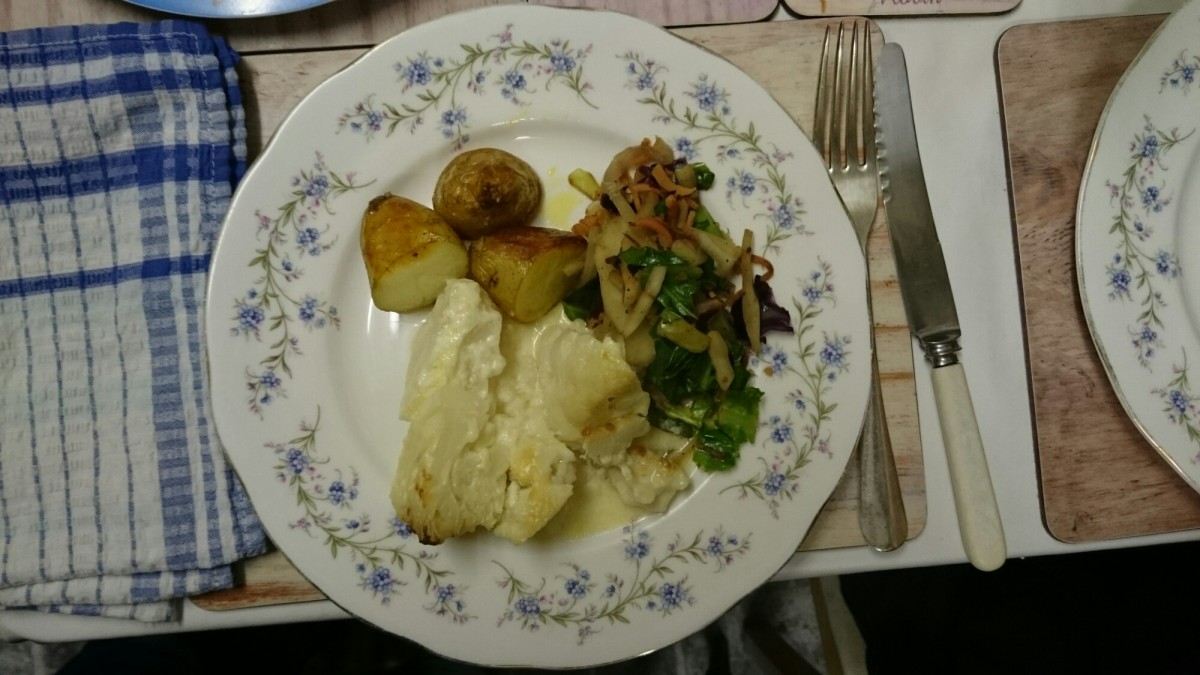 (I was also rather impressed that I managed to sneak a vegetarian meal past my primarily carnivorous partner. Not something that happens often I can assure you.)

Potatoes can be pretty boring. These weren’t, and I’ll definitely be buying them again. Thanks for the prompt foodies and tesco!