Playing with my paints again. 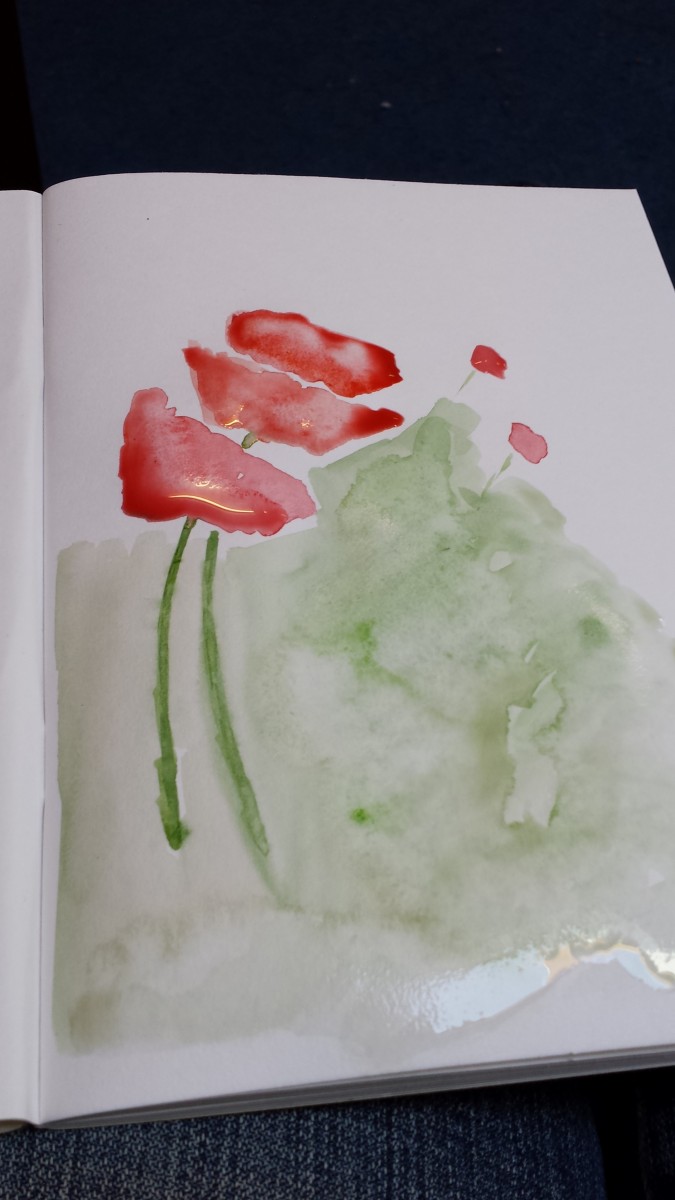 Hopefully all this will mean less stress and more creativity. I miss the community though, and I don’t know what to do about that. There used to be community in blog rings, comment boxes and so on, but facebook, twitter etc wiped that out. And replaced it with what has become an angrier, shoutier place overall. Too much noise.

I was clinging on for the friendships I’d found and cultivated there, but I don’t know how much room there is for that sort of thing to grow up any more. Is this a natural devolution, or have the algorithms and tweaks pushed social out of existence?

(I’ll pop back with the finished picture when it’s finished. )

If you’re in the habit of sharing your blog or brand links to facebook, you may have noticed that recently something changed and instead of the one link with image preview, you get a kind of carousel effect. This is, quite frankly, kind of irritating.

You’ll be pleased to hear that it’s easy to avoid. 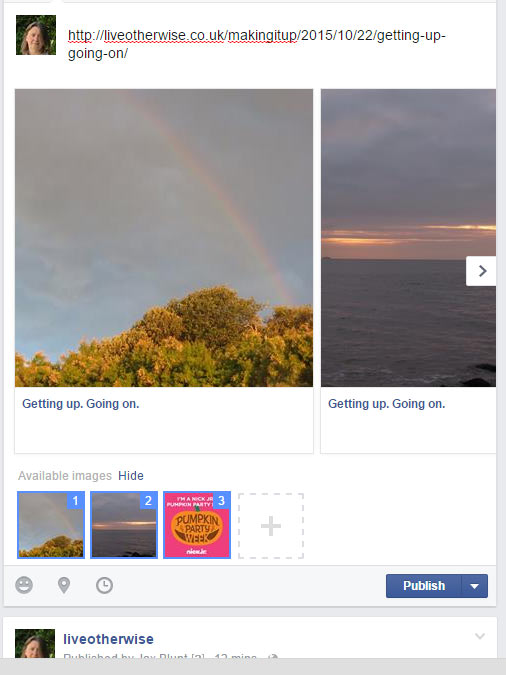 As you can see, I’ve pasted in the link to one of my recent, (highly popular!) posts, Getting up, going on. Facebook has popped to my blog and harvested three images, two from the post, and one, slightly irritatingly from the sidebar.

Scroll down under the preview carousel and you’ll see the three images are there, with blue boxes and numbers. Click on the images you *don’t* want, to deselect them. Then when you hit publish, after you’ve edited the text into something inviting and shareable of course 😉 you get the one image preview instead of the somewhat bizarre carousel effect that all lead to the same place anyway.

This tutorial relates purely to the web interface, I haven’t investigated thoroughly from mobile or apps but hopefully that gives you some hints as to how to make it all look a bit cleaner.

If you found this tip helpful, do please share, and if you’re coming to Mumsnet Blogfest this weekend, do find me in the tech clinic and pick my brains. Looking forward to seeing you there!

I look a bit like this. But not hugely, given I won’t be wearing glasses and my hair has grown a bit. Will replace with more up to date picture when there’s enough light to take a decent shot 🙂 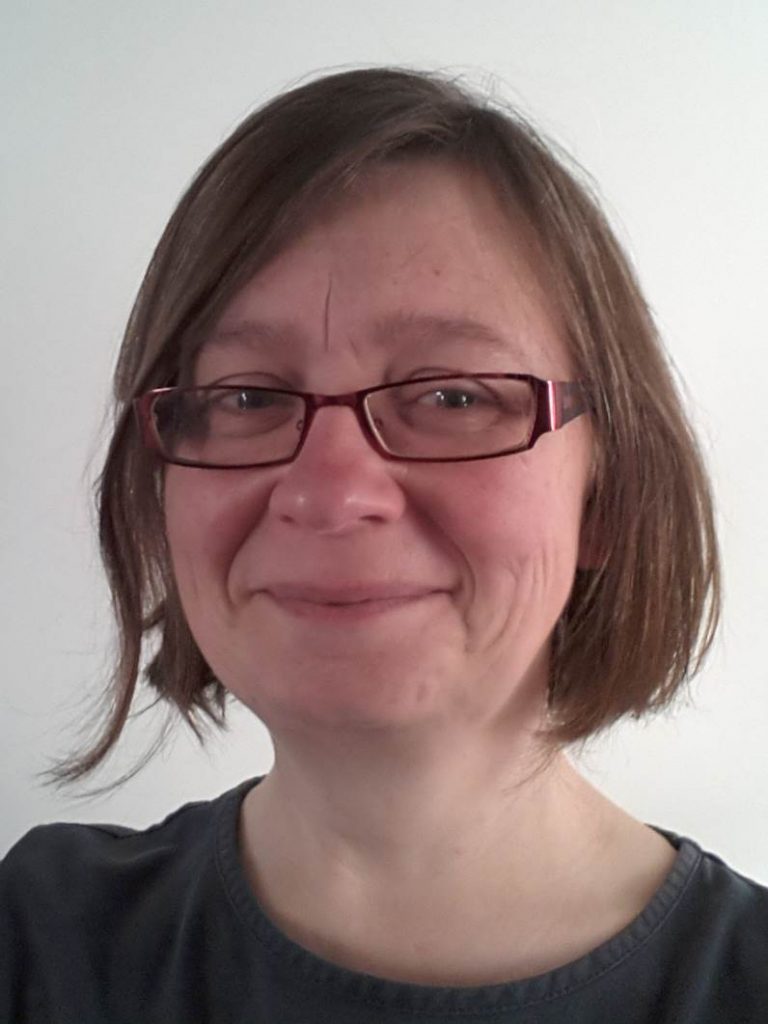 Just over a week ago I blogged about why (and how) I’d opted out of Klout. I’ve read yet more articles about it since that confirmed to me I’d made the right decision – I particularly enjoyed the The Fairytale of Klout earlier. Given their recent glitch where many ppl saw another drop of anywhere up to 20 points, I think it’s possible the Klout bubble is well on its way to bursting, but hey, who knows.

But it does leave me lacking a social media metric. Almost as soon as I started reading rumblings about Klout, I picked up on rumours of a new kid on the block, called Kred. Obviously I joined the waiting list ;), and this week I got my invite to the beta system, probably because they got tired of me going on about it 😉

First things first, it isn’t supposed to be a Klout replacement. Instead of a one of score, you get a two parter – one is out of 1000 and is based on your influence – and is normalised against other users. The second is your outreach score and is out of 10. I’m told by Andrew Grill (the CEO of PeopleBrowsr UK who are the company behind Kred) that your outreach score will never fall and isn’t normalised. So the headline score on the Kred badge might not tell the whole story – you need to look at ppl’s recent activities to be sure of what’s going on. At the moment the badge isn’t available to put on your blog/ site, but it’s under development.

The site is a touch on the slow side just now, which is a bit disheartening given it’s in beta and presumably not under heavy use. However, the positive points are many. There is an open and obvious privacy policy, so you can set your profile to one of three settings, public, private or anonymous. The company is responsive on twitter – I’ve had good conversations with both @kred and @AndrewGrill which leads me to hope they are listening to their beta users, and will avoid the major holes Klout seem to have dug for themselves.

The biggest plus though is complete transparency of how your Kred score is reached. It’s all in the Kred Rules – you can see what you get points for and how that translates to your score. This is a major major plus point – one of the biggest criticisms of Klout is its complete lack of transparency. Similarly I find Peerindex pretty inscrutable, and despite one tweet from their CEO this afternoon recommending I look at topical influences, he didn’t come back to say what they are or why. (I did go look. I’m very influential on swimming. That would be because less than 50 ppl have mentioned it apparently. Hohum.)

The thing I’m not sure about on Kred is communitites. I get the idea. That we form communities around our interests, and also that you can be influential in a community you aren’t really that involved in, if ppl in that community RT your stuff etc. But if you look at the top of the home business community, for example, it consists of ppl/accounts who have very little interest in it, and are mainly tweeting streams of quotes. I know this is a problem for social media metrics throughout the system, and I confess I do wonder why ppl so slavishly RT cliches and quotes (dons hard hat and prepares to go down in flames) but I think it can probably be worked around. I did enquire as to whether self created communities are on the cards and was told it sounded like a great idea, so you never know.

I’m hoping to have a bit more of a chat with Andrew and possibly run a blog interview with him very soon, so if there’s anything else that springs to mind for you all, do let me know.

Of course, you’re all wondering why I care, given how negative I’ve been about Klout recently and stats generally in the past. The bottom line is that measurement of our activity online isn’t going to go away, and if I want to make some money out of my blogging/ social media hobby (which I do, we have three children and another on the way!) then I have to know what ppl think is important and how it all works. I got burnt by Klout, and I’m not prepared to have it happen again. I want to know how these systems work, as I believe information is power. And yes, I like numbers. So there you go.

I thought I’d talk briefly today about something topical that doesn’t involve NotW, honest, and that might hopefully give a few of you out there some help.

There are lots of twitter hacks. The current one going around sends DMs from affected accounts offering $$$s for working from home. Hopefully everyone knows not to click on the links, which tbh, look so spammy that they shouldn’t catch many ppl out.

But in response to this, I’ve seen ppl pondering how their strong passwords have been hacked. I may be missing a trick, but that’s not usually how it works.

Usually hacks like this are to do with some application or other that you’ve authorised. That’s when you leave their page and go to twitter to let them have access – that access remains even when you come off the app. And if it’s a dodgy app, a few days later you’ll find yourself sending dodgy DMs.

The answer? Go through the apps you’ve authorised* every now and then, and wipe out anything that looks in the slightest bit dubious, or that you can’t remember, or just don’t want any more. And yes, changing your password won’t harm you, and it might complicate other ppl’s lives, so go ahead and do that too. And don’t use something easy. So there you go. Just be careful what you give access to your account, and twitter will be a safer place for all of us.

*Wondering where this is? On new twitter, go to your name in the top righthand corner. Click to get the dropdown, then click settings. The rightmost entry is applications, this gives you a list of what you’ve authorised. This is what it looks like for me, if that’s any help. 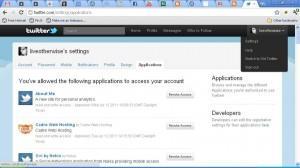 (Now, if that has helped you at all, for one day only, today (ETA voting extended until Tues 19th midday), if you’re reading this after then, don’t worry) I could do with your help back. Feel free to pop over to Three UK On the Go Mums and vote for my Family Quest app. If it wins, it gets developed, we all get to use it for free, my name and those of all my team will be in it, *and* we get a meal out to celebrate. How cool is that?)

Obviously I have enormous amounts of stuff to get ready for the weekend and weeks ahead, just as obviously I’m suddenly shattered and in pain from the run yesterday, and now coming down to earth with a bump after a lovely morning with my #MumsOnThree posse (great to meet you all!) and fantastic lunch courtesy of Three and their On the Go Mums campaign. So instead of even spending time making a list, I’ve done some page editing and then fiddled with my AddThis plugin, upgrading it and tweaking the options on show.

I’ve gone for the Google +1 button. I considered this carefully as I’ve heard rumours it can adversely affect technorati rankings. Given that my technorati ratings have suddenly dropped to 25% of their previous average, I don’t think I need to worry about that too much (what is *with* that??) and as I think the future of the search is increasingly going to be social, I thought I’d give it a whirl.

I had a read around and a chat on twitter as well, as you do, and had this article on the button recommended to me too. I liked it so much that I activated my google profile to +1 it. Which leads me to wonder who is going to go through that – will it be bloggers? On some levels we are early adopters of a lot of this stuff, particularly in the social media arena, but in this case, you have to have a public profile that shows who you are and what you’ve liked. I opted out of having google customise my content and search results based on my recommendations, and I wonder if that will counterbalance the whole thing, and whether it will end up being a complete flop.

Only one way to find out though, and that’s by giving it a go. Would love to hear your thoughts in the usual place. Or places. And if you think the article is interesting, do feel free to share or +1 it 😀