This does remind me of something, but I’m not sure what.

It’s a romance, but it’s not fluffy. It’s edgy, with slightly bruised and battered characters despite their youth. They aren’t lovely, they aren’t the centre of attention, they’re barely getting by on the edges.

The language surprised me. I swore like a bar worker through my teens and early twenties but reject bad language now, and I found the first few pages uncomfortable going. That faded away as I got into the swing of it, and I found myself absorbed into the story.

Perhaps it’s something like Heathers? But not quite. No, that’s not it. It’s a John Hughes movie maybe, but not quite so polished. Because most of those have soft edges, while Eleanor and Park is definitely prickly.

The cultural references amused me. It felt strange to have so many familiar songs and books from my own teen years in a modern YA book. I did wonder what Big made of that, I suppose most of them must have passed her by. And the cultural stuff felt a little false, not that I know much about Korean culture it has to be said.

All in all, this was an absorbing read, more challenging than other YA romances I’ve read recently, but feeling like it’s definitely a keeper. (I nearly started rereading it immediately. But I decided I’d rather have a little gap then I could cherish it properly. )

Linky to be added later, I’d love to hear what you’ve been reading.

Can’t use the title I wanted to use, because I already used it. So I’ve had to put the whole lyric in, instead of just half 😉

It’s been that kind of day really.

Big started the day with a physio appt, (which meant I started the day hauling her out of bed and going to a physio appt) to replace the one we totally forgot two weeks ago after the last Kentwell mini. It’s really just a case of keeping up with the exercises, but she finds it hard to remember to do them regularly, so she’s been referred for a course of pilates classes, on the NHS. Apparently you can be referred for one batch of 6, and that should teach you enough to do it on your own, but if you want more classes you can pay and go to the ones I’ve been going to. Which makes me feel a bit better – I thought the physios were referring direct on to a paid service, which didn’t sit all that well with me.

Then Tim had another eye appt, and I was waiting for a woman who we’d cancelled, but was supposed to be ringing, and she didn’t turn up or ring, so I don’t know what’s going on with Tigerboy’s communication group yet. And I think it probably started last week 🙁

When I’m waiting for something to happen, I find it really hard to do anything else. And I had another appt of my own this afternoon, which was kind of filling my head.

That made 4 1/2 hours of talking about myself, my childhood, my thought processes, difficulties, confusions and so on. And I don’t actually know what the psychologist concluded, if anything.

It’s a bit like scraping your brain out with a spoon, into a bowl on the table in front of you and having someone poke it a lot, then trying to fit it all back in again. It doesn’t feel quite like it fits. And it’s in the wrong order, and a bit bruised.

(It’s not at all like that really, but I’m trying to explain how I felt when I came back. Wrung out. Shaken up. Lost for words.)

And while I was gone, Small thought it was going to rain, and rushed to bring the (still wet) washing in. And I told him it kind of needed to go back out again, so he took it out, and then hung it all crammed together on one side of the airer. And I snapped at him.

And then I took a very deep breath, reined in my inner Sheldon, and thanked him for being thoughtful, apologised for being horrid, and dealt with redistributing the washing myself.

On my way through town decompressing after my appt, I popped into a charity shop, and picked up a copy of Eleanor and Park. When I got home, I discovered Tim had confiscated Big’s internet devices, and she was very happily planning a herb garden instead. Once she’d done that, I gave her the book. 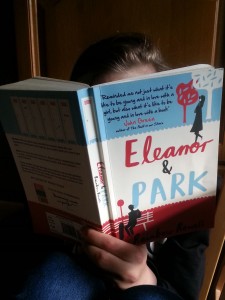 Then I did the cooking, even though it was her turn, so she could read.

Come on, I must be doing alright by now?

Except dinner was a bit late, because we were doing this all over the kitchen floor. 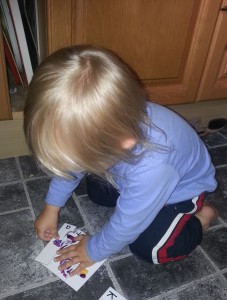 He loves jigsaws. And he recognises quite a lot of the letters and will read them out. I probably was taking it a bit far trying to teach him to blend the sounds though, given he doesn’t really talk. So now he points at each of the letters on the ball jigsaw before saying ‘baw’. Unutterably cute. Not sure whether that’s good or bad mummy to be honest!

There’s more to come. I bought some diverse picture books in the charity shop too, and we read one of them tonight. You’d have thought by now I’d have learn to scan books before reading them at bedtime, but no. The dolphin was a gonner, and poor Smallest sobbed and sobbed, so we had to have a chapter of Milly Molly Mandy as well to settle her down.

I think that’s probably about evens over the day, yes? I’ll quit there before I fall behind!