The first book I ever read to Big, when she was just weeks old, was Harry Potter and the Philosopher’s Stone.

I know, it’s an odd choice. But there I was with a baby who basically never stopped screaming. She liked to be talked to, and I didn’t know what to say. I didn’t have hundreds of baby books, I did have Harry Potter, and I’d heard good things about it, so it seemed like a reasonable decision.

Recently we were offered costumes from Sainsburys for review for world book day. There was a range of princesses, goldilocks, something from Frozen and Smallest took one look and chose: 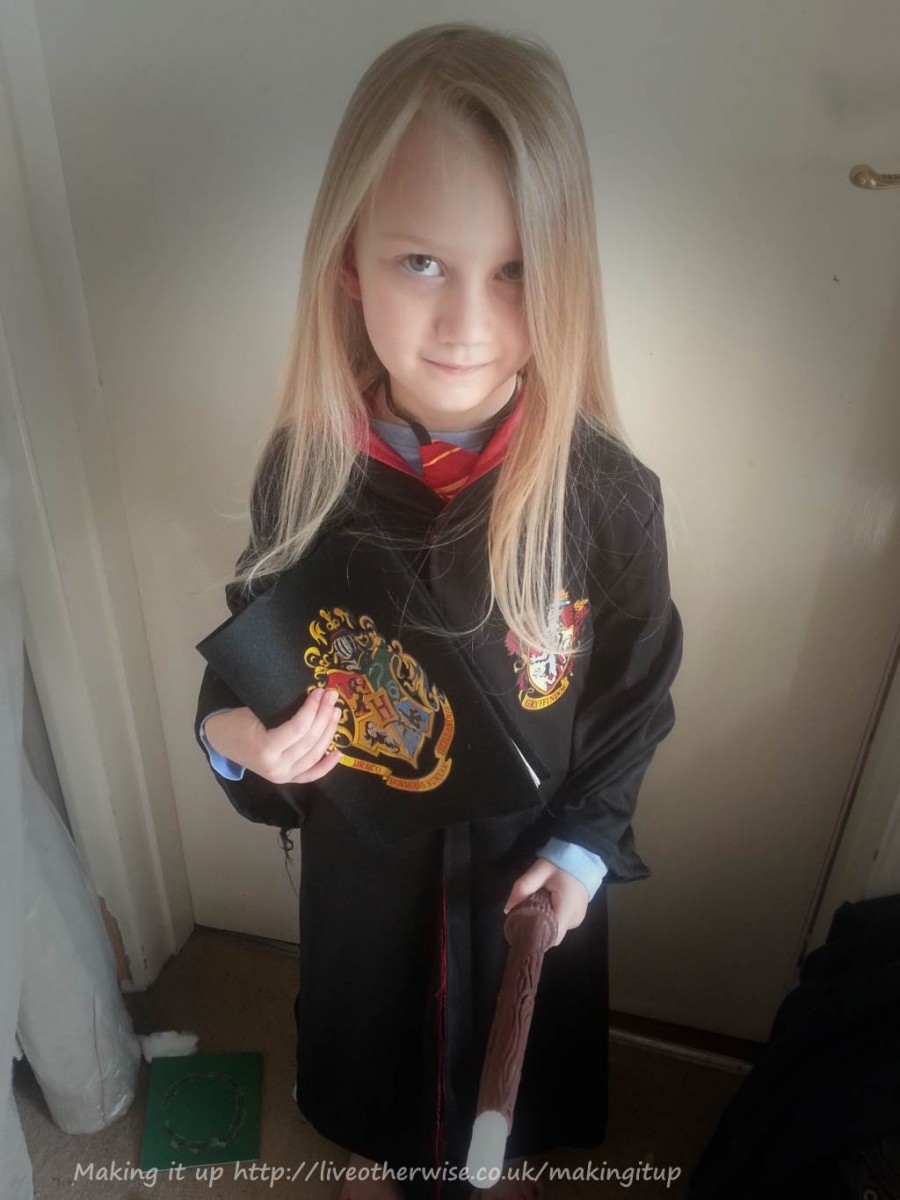 I am so proud. It’s a great costume, comes with a wand with light up tip, an exercise book cover, tie and glasses, as well as the hooded robe. It’s griffyndor, obviously – and it triggered Big started reading book 1 to her. And so the cycle continues.

There was only one possible choice for Tigerboy. Given that there wasn’t a tiger 😉 Or a stick man. Ooh, wonder if I could make him a stick man costume sometime? That would go down well. 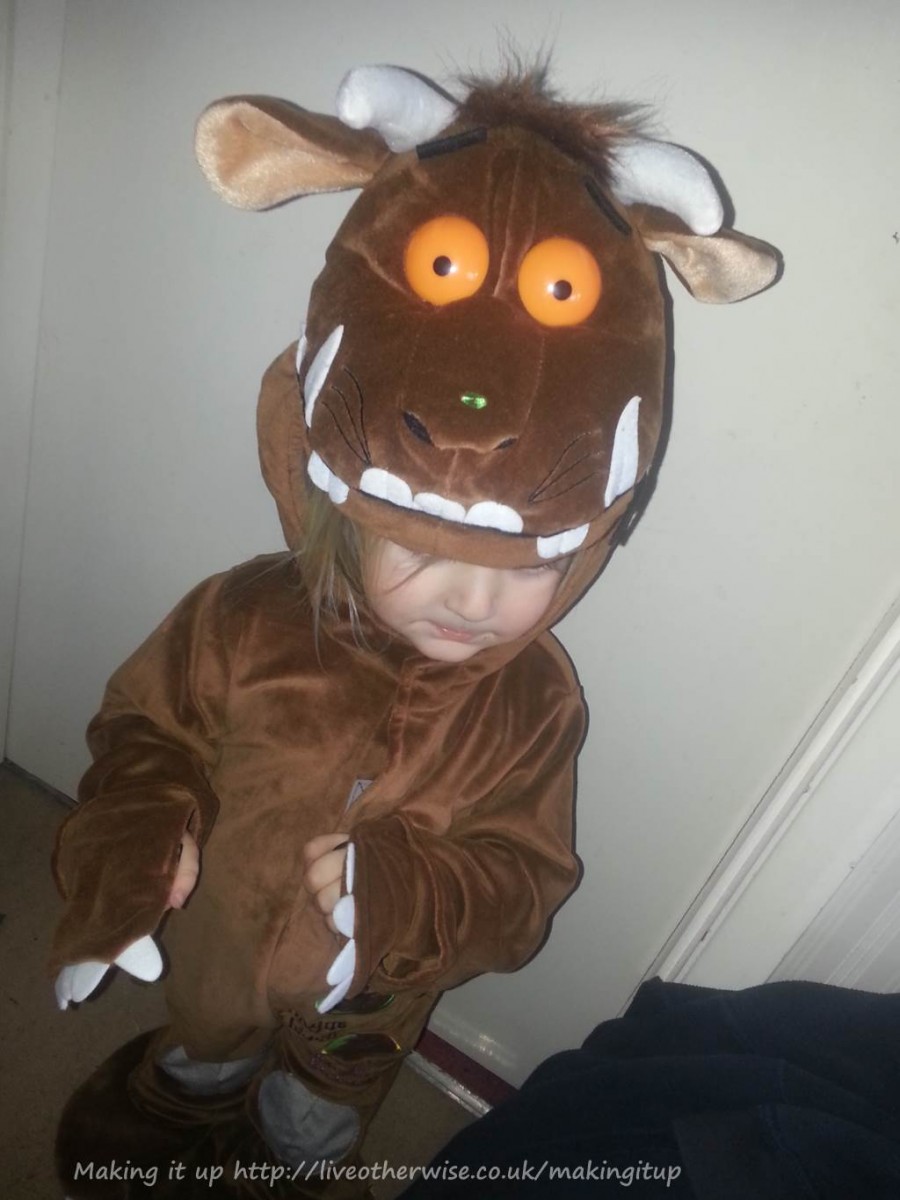 Isn’t that just too cool? He has very short legs, so the feet are slightly problematic – I think I’ll put a couple of elastic straps across to hold them in place. Otherwise it’s brilliant, and if your child is of more normal proportions, I think this would be fine.

I’m kind of surprised that while Harry Potter features (several times) on the 50 books every child should read list, there’s nothing by Julia Donaldson/ Axel Scheffler. So no Gruffalo.

Here’s the list, as compiled by Sainsbury’s as part of their Make Believe campaign, supporting children’s reading.

THE 50 BOOKS EVERY CHILD SHOULD READ BY AGE 16

3. The Lion, the Witch and the Wardrobe- C.S. Lewis

16. The Wind in the Willows- Kenneth Grahame

24. Lord of the Flies- William Golding

29. The Diary of a Young Girl- Anne Frank

32. The Boy in the Striped Pyjamas – John Boyne

34. The Tiger Who Came to Tea- Judith Kerr

36. The Day of the Triffids by John Wyndham

41. Where The Wild Things Are- Maurice Sendak

43. The Curious Incident of the Dog in the Night-Time – Mark Haddon

50. Each Peach Pear Plum by Janet and Allan Ahlberg

What strikes me about it is that there are a lot of pretty old books. I’d love to know who the experts were who compiled this list, and felt that The Secret Garden and The Story of Doctor Dolittle, for example, are more important than, I don’t know, something featuring different cultures, like Sita Brahmachari’s work. Or perhaps Malorie Blackman (although I confess I haven’t read Noughts and Crosses yet, it’s on my wishlist though 😉 )

I don’t really agree with *should* lists. I think it’s incredibly important for children to have access to a wide range of books, and the one they need at any given time to reach them might not be anything that anyone else thinks is important. (I’m remembering a child I taught for a little while who was a very proficient reader, but had no love for it, and it was at least in part because her previous school had focussed on worthy books. I had a range of stuff available, and what turned her on to reading was Dick King Smith, the hodgeheg, that I read out loud as a class story.)

I don’t think that old books are better than new books. Or harder books are better than easy books. I guess if pushed I’d try to come up with a list of 50 books that I’d start by offering my kids, an awful lot of those on the list above wouldn’t make it though. There’s a bit too much sameness to it all, and a lot too much worthiness.

How about you – what makes a book something you’re recommend to a child? Could you come up with a top 50?

Disclosure: we were supplied with the costumes free for review. Sainsbury’s has an extensive Make Believe range in store, but it no longer seems to be online.

It’s been a weekend for contemplating clothing. I tried on the kirtle from Kentwell last night, and think either I’d have to lose a bit more weight, or give up breathing for a week 🙁 Tried it on Big today and it looks rather more manageable, so will have to discuss with Katy whether to adjust it for Big, or adjust it for me, or go back to the drawing board completely.

Lots of reading of costume notes today, and perusing of accessory and costume websites this evening. This I might buy a copy of The Tudor Tailor

to assist, I can’t quite get my head around how to get started. Also been looking into fabric sources – we need unbleached linen (apparently Ikea is a good source, shame there isn’t one anywhere around here!) and then wools in muted colours. The local fabric shop might do some of what we need, difficult to tell given their utterly disastrous website. Will actually have to go down and talk to them I suspect.

Going to have to buy shoes I think, really don’t think that I can make them. So that will set us back over £100. This is turning into a fairly expensive history lesson! Still, talking about the expense is a lesson in itself, and discussing how the Tudors would really have managed. It occurred to me that many of the Kentwell costumes that I’ve seen so far are too pristine. They would have been let out, adjusted, handed down, patched – families would not have been able to outfit everyone in new clothes from scratch all the time.

As a break from Kentwell ponderings, Big and I went off to the local art gallery for a private viewing before their new exhibition opens on Tuesday. I’m not entirely sure how we’ve made it on to the invitation only list, but I’m not complaining. It’s rather nice to go along, and today we got to meet the artist/designer/illustrator Sonya Todd, who is the focus of the current exhibition. It was rather fascinating actually – she worked in fashion design in the 1960s, and the prints and illustrations as well as the clothes on show were utterly of that era. I particularly enjoyed the double spread of pics of fashions for Purdy. Think Tim missed out on that one 😉

Quiet afternoon as we’re all tired here. In fact I have no idea why I’m still up, other than that I’ve been pottering about on twitter and randomly commenting on other ppl’s Silent Sunday posts. And responding to comments on mine. All good though.

And the evening involved the obligatory trip to the leisure centre. Big wasn’t sure she could last the whole evening, so instead of dropping and running as I usually do on Sundays, I stopped with Smallest, having popped baked potatoes in the oven for tea, and got to have a lovely chat with another swim club mum. She’s from the North East too, just like Sonya Todd is, so I got my fix of proper accents twice in one day 😉