I have written stories for as long as I can remember.

I’ve started drawing and painting and general art. But I’m not sure about the local art club.

And there’s knitting and sewing and crochet and spinning, costume to make and felt to, well, felt.

Creativity is something that gives me great pleasure, but I have a habit of losing focus.

At the back of my mind is this idea that if I could create a creative community around myself I could give and receive support and direction. Perhaps I could take a story from first idea to novel. Maybe I could illustrate a picture book.

(There was a self taught artist who has only been painting for two years shared on instagram’s own account today. There is no limit to where we can reach if we let our dreams lift us. )

So I have this idea that we could build a creative circle. Share our goals. Set challenges. (I have some ideas) Offer encouragement, gentle constructive criticism and support. Anyone fancy joining in? Please comment if so. And feel free to share. You don’t need to have a blog to join, just some way of sharing your work, be it photos or whatever really.

Hoping there are a few of you that think this sounds like a good idea! She walked the boundary. Once she would have run it, but these days, she was lucky if her knee would support a brisk walk. She carried a stick just in case. It was useful for beating back the brambles and bindweed.

As she walked she looked to left and right, and sometimes, flashes of memory overlaid themselves on the scene before her. Scrambling over a sandy bit she caught a glimpse of a broken stand pipe, and saw a boy there, washing his shoes, water running freely away across the concrete prom to wash down the beach, past the discarded cans and plastic bottles. Her memory, or just one relayed to her so often that it seemed hers? No way of distinguishing any more.

The casual waste. Good water used to wash shoes, when the sea was metres away. Plastic bottles used once and left to be washed away to sea, so much extra flotsam and jetsam. The profligacy of those years was mindblowing.

The boy faded away. She was alone above the coast again. Gulls wheeled shrieking above her head, the warm wind whipped her hair about her face. Somewhere in the town there was a fire burning – the smoke rising steadily into the lightening sky. When the walk was done she would investigate the fire, but on the quarter days, the boundary had to be checked. It was the way of things.

Was the watermark higher than on the solstice? Perhaps it was just the storm mark. She noted it any way, pausing for a moment to mark it in her notebook. Years and years of notes now, from her mother, and her mother before her. The waters were still rising. But slower.

I don’t know where it goes yet. Or if it’s any good. But maybe if I write it down, I can move on to the next scene?

I learnt to crochet when I was around 9 I think. My (first) step mum’s mum taught me. She had a soda stream as well – I loved visiting her, and was heartbroken when she disappeared from my life.

(I assume that was the marriage fell apart. I lost my step siblings too. Not a huge heap of fun. )

Anyway, crochet. I’ve always been able to. I’m way better at it than I am at knitting. I even designed my own doll dress pattern a while ago (I should probably test that pattern properly and re shoot the pic)

But a couple of years ago, I’m not sure when, I just sort of stopped. I’ve done a few little toys here and there, but nothing major. Then Smallest started agitating for slippers. And I went on Garnstudio. Before I knew it there was a pinterest board and a yarn order and so it began. 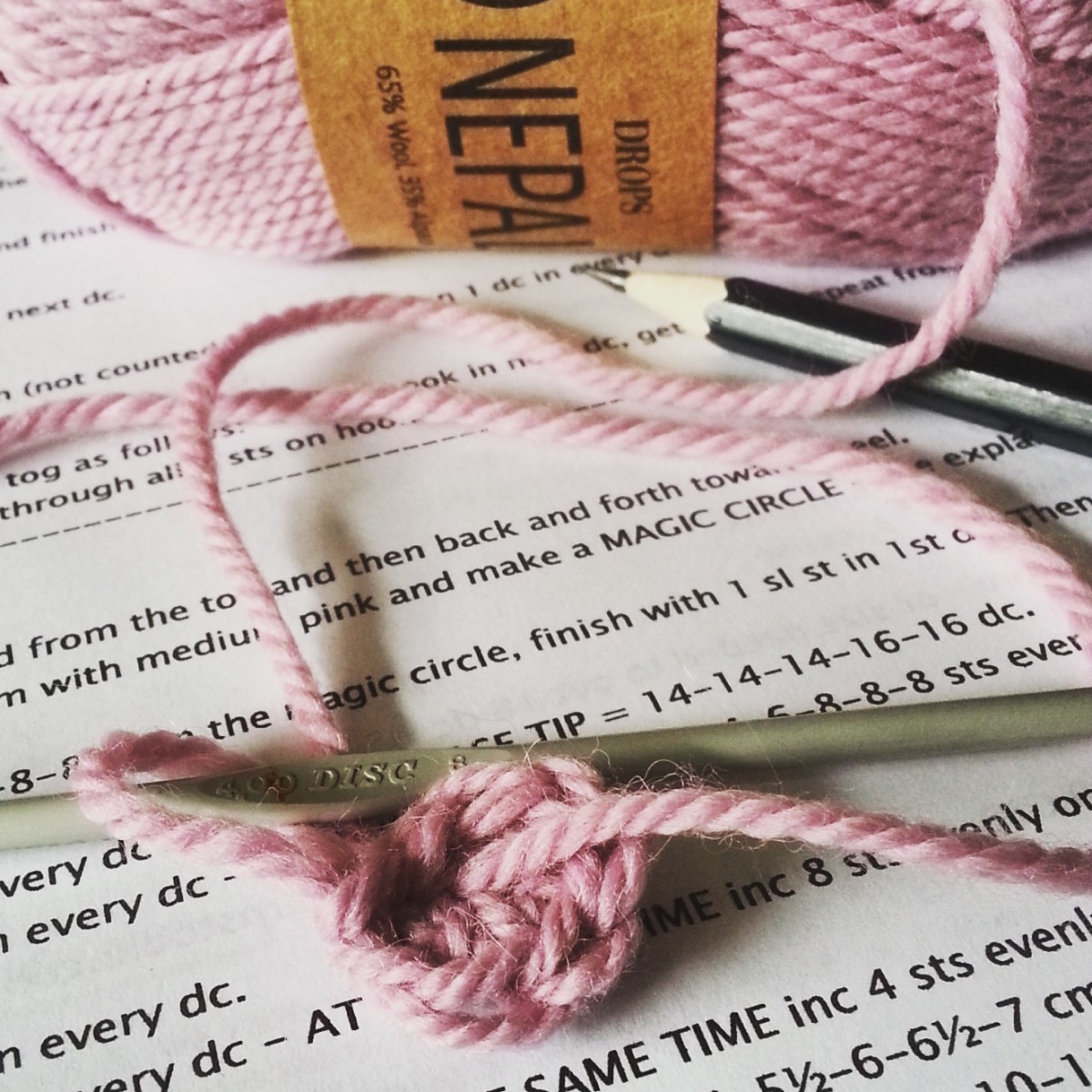 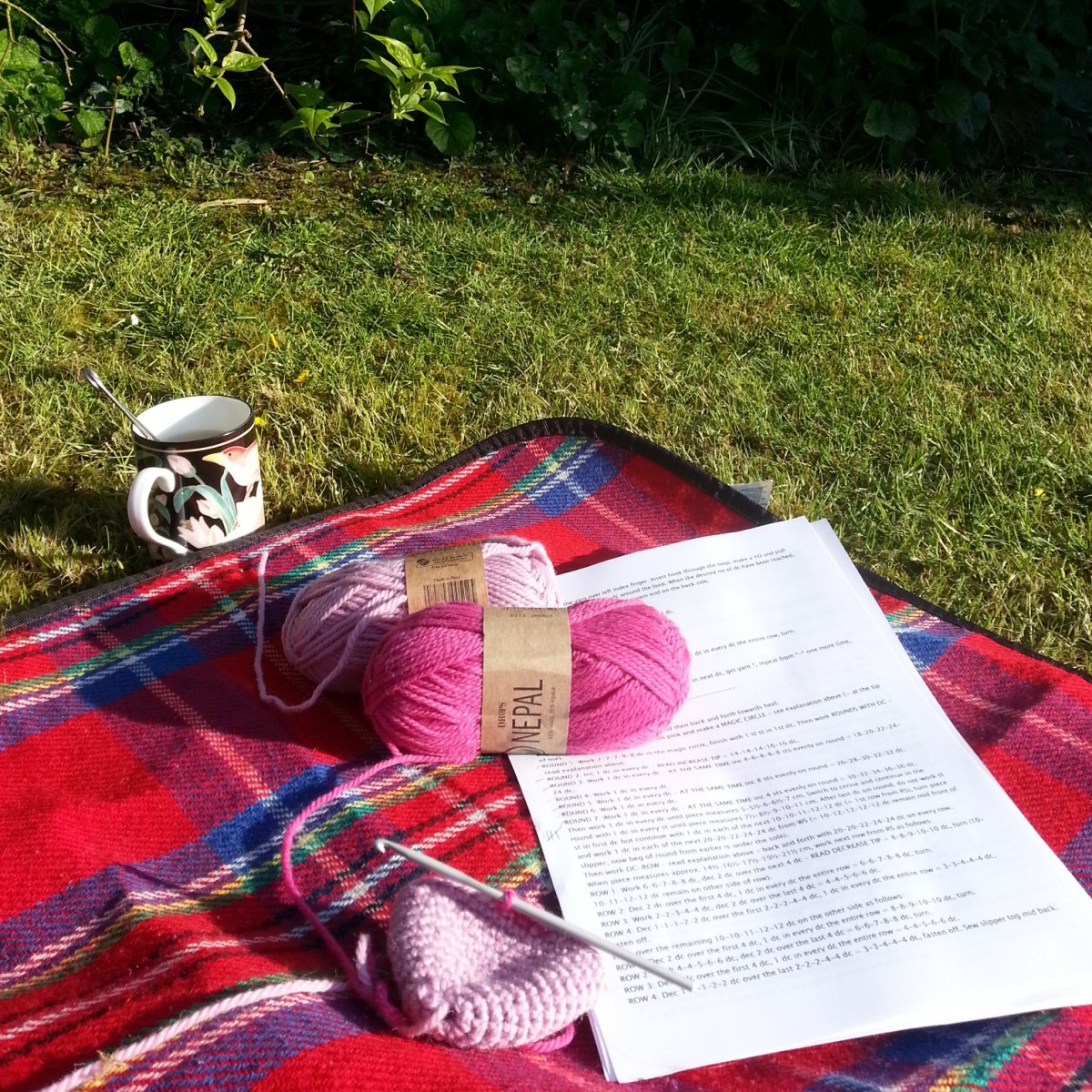 It feels kind of good, getting back into it.

I’m not sure how many words I’ve spilled out in random places on the Internet over the last ten years. Quite a few. Over 4000 posts here. Lots of comments. More tweets than I care to admit to, and then there’s Facebook, forums, email groups.

A lot of words.

And yet I can’t find time to write a book. Or more accurately, I’m scared of trying, succeeding and then being rejected.

I’ve got an envelope full of rejection slips from my teens and early 20s. A lifetime ago. Was I braver then? Or did I just have less to lose?

I’m not sure. Not sure what holds me back. I have ideas, but don’t know where to start to turn them into structure. Perhaps I should write them as a blog, I’ve got enough experience of that.

But whatever I do, I ought to write. When people asked me as a child what I wanted to be, it was either vet or writer. I’d have made an awful vet, I’m far too soft hearted. I’d have a house full of rescued animals. But it’s still a dream I’m sad I never managed to fulfil.

Now though, it probably is time to work out how to address other dreams. Small ones, for half an hour of peace and quiet. Larger ones of successful businesses and house extensions. And personal ones, of writing a book.

And if no when I manage that, I want to draw a picture book.

I should get some great rejection slips for that one.

A little while ago I set myself a creative challenge.

First of all I had to buy some dpns (double pointed needles) the local charity shop came through there, with three different sets for £2.40. Bargain.

So I tried with some handy acrylic yarn. 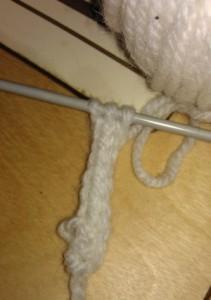 But really I wanted to use something special – like this recycled silk yarn. 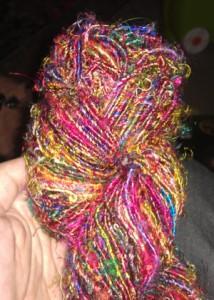 It didn’t have quite the effect I was looking for. The yarn search began again. 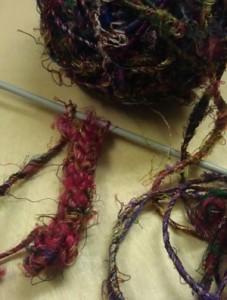 Hm, just a thought. We used some like this to make friendship bracelets – could be worth a try. 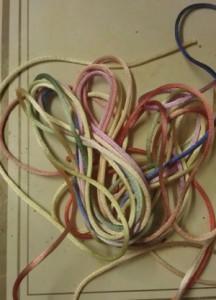 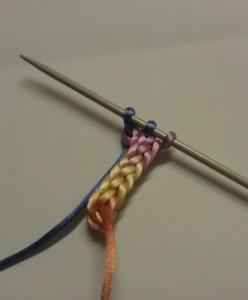 And the finished cord. Without fastenings, as the ones I’d got are a dark silver if that makes any sense, and I don’t think they’ll go. I bought them to go with the sari yarn, but it really didn’t work. 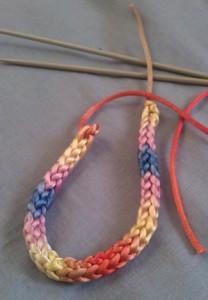 I’m quite pleased with the cord though.

Love to see what you all got up to – linky below. For my next challenge, I think I’m going to try icord with some different materials – I’m wondering how it would work with jewellery wire. Please feel free to link up any planned challenges you have, and I’ll be back in a bit with the results from mine…