Disclosure – links to bookshop.org on this blog are affiliate links. Other booksellers are available. 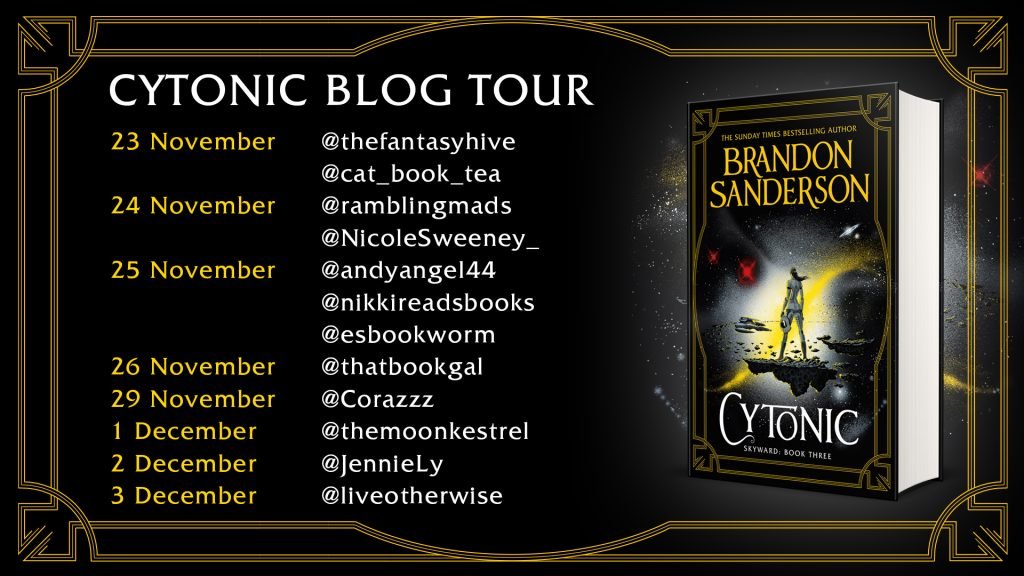 Today I’m really pleased to be taking part in the Cytonic blog tour for the latest instalment in the Skyward series by Brandon Sanderson.

Spensa’s life as a Defiant Defense Force pilot has been far from ordinary.

She proved herself one of the best starfighters in the human enclave of Detritus and she saved her people from extermination at the hands of the Krell – the enigmatic alien species that has been holding them captive for decades. What’s more, she travelled light-years from home as a spy to infiltrate the Superiority, where she learned of the galaxy beyond her small, desolate planet home. Now, the Superiority – the governing galactic alliance bent on dominating all human life – has started a galaxy-wide war. And Spensa has seen the weapons they plan to use to end it: the Delvers. Ancient, mysterious alien forces that can wipe out entire planetary systems in an instant.

Spensa knows that no matter how many pilots the DDF has, there is no defeating this predator.

Except that Spensa is Cytonic. She faced down a Delver and saw something eerily familiar about it. And maybe, if she’s able to figure out what she is, she could be more than just another pilot in this unfolding war. She could save the galaxy. The only way she can discover what she really is, though, is to leave behind all she knows and enter the Nowhere. A place from which few ever return.

To have courage means facing fear. And this mission is terrifying.

I’m not quite sure how I’d managed to go so long without reading Brandon Sanderson books – but somehow they’d passed me by. Until I was sent the first in this series, Skyward which I absolutely loved. It’s a real ripping SF adventure yarn which absolutely rockets along, and I thoroughly enjoyed. In fact, if you’re looking for Christmas gifts for teen SF readers, you really can’t go far wrong with this set, and they’re also really good looking books too.

The only problem I have with them now is the same that I have with all hefty books, and that’s holding them for any length of time, as my poor hands just can’t really cope with weight. Just as well I’m a fast reader and these are fast reads, so I don’t tend to end up hanging on to them for too long.

I’m really enjoying keeping up with Spensa’s adventures, and the development of this world, and I definitely recommend taking a look!

Don’t forget to check out the other bloggers mentioned on the tour poster above to see what they’ve got to say about it all.