I was provided an eArc of this book for review, and Amazon link (image) is an affiliate link.

He had started to remove his clothes as logic had deserted him, and his skin was cracked. Whatever had been going through Cameron’s mind when he was alive, he didn’t look peaceful in death.

Two brothers meet at the remote border of their vast cattle properties under the unrelenting sun of the outback. In an isolated part of Australia, they are each other’s nearest neighbour, their homes hours apart.

They are at the stockman’s grave, a landmark so old that no one can remember who is buried there. But today, the scant shadow it casts was the last hope for their middle brother, Cameron. The Bright family’s quiet existence is thrown into grief and anguish.

Something had been troubling Cameron. Did he choose to walk to his death? Because if he didn’t, the isolation of the outback leaves few suspects…

I loved Jane Harper’s first two books, The Dry and Force of Nature, and I was a little disappointed to hear that her third book, The Lost Man, didn’t feature Aaron Falk, the detective from the first two.

I wasn’t disappointed for long.

The Lost Man isn’t just a crime novel. It’s an exploration of a family, a town, a landscape, and yes, a death. There’s so much more to it than the crime though, as it weaves narratives of several family members together, and deftly takes apart people and their motivations.

There aren’t any heroes. There are certainly villains. Are they who you think they are? If you’re anything like me, you’ll be kept guessing throughout, as the story unfolds like the landscapes in her descriptions. It’s so vivid that it feels like a memory rather than a piece of fiction – I can’t begin to describe people and places the way Jane Harper does. I read this book back in October according to my kindle, and it’s stayed with me throughout. Although I am thinking that maybe I deserve a re read.

I’ve yet to meet anyone who has read The Dry or Force of Nature and not adored them. I actually think The Lost Man is even better, which I didn’t think was going to be possible.

Buy this book. But be ready to block out the next couple of days for reading. You won’t want to put it down. 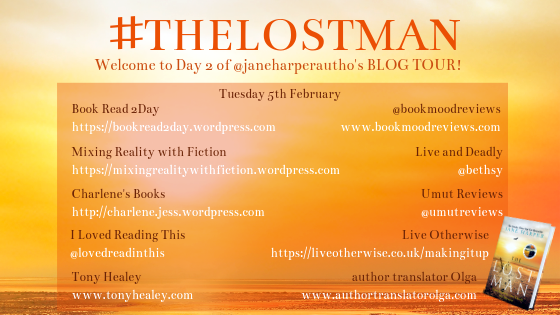