Today I’m pleased to be helping kick off the blog tour for the award winning The Leavers by Lisa Ko.

One morning, Deming Guo’s mother, Polly, an undocumented Chinese immigrant, goes to her job at a nail salon – and never comes home. No one can find any trace of her. With his mother gone, eleven-year-old Deming is left mystified and bereft. Eventually adopted by a pair of well-meaning white professors, Deming is moved from the Bronx to a small town upstate and renamed Daniel Wilkinson. But far from all he’s ever known, Daniel struggles to reconcile his adoptive parents’ desire that he assimilate with his memories of his mother and the community he left behind.

Set in New York and China, The Leavers is a vivid examination of borders and belonging. It’s a moving story of how a boy comes into his own when everything he loves is taken away, and how a mother learns to live with the mistakes of the past.

Given the state of the world around us at the moment, this is a timely read. On belonging and not belonging, the stories of Deming/Daniel and Peilan/Polly his mother are tangled in past and present, knitting together families, cultures and countries.

The narratives switch between Daniel and Polly, and with a less talented writer, the switch in perspective would be a harsh interruption. But this flows despite the harsh content, in the way that a stream finds its way around rocks and tree roots. There’s a depth to the characters that draws you in to their story, making unfamiliar words and relationships welcoming and understandable. And discovering Daniel’s music linked him to my family, with a teen son playing guitar and a daughter writing songs.

I’ve set myself a challenge recently to read outside of my culture, to broaden my understanding of the world around me. (It feels like the only way to get to grips with the way our own country is dividing around us. Perhaps if I explore the reasons behind the divisions I can see a way to heal them?) The Leavers is a book with a wealth of areas to understand, America, China, adoptive families and homes broken by bureaucracy. (Like I said, timely.) I can see I’m going to be recommending it over and over, and reading it more than once myself. There are so many layers to the story that I know I’ll get more from it every time.

A beautiful, powerful, and important book. 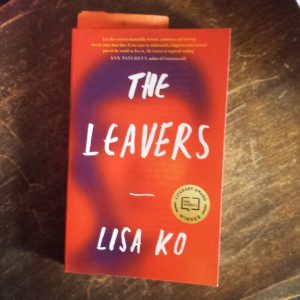