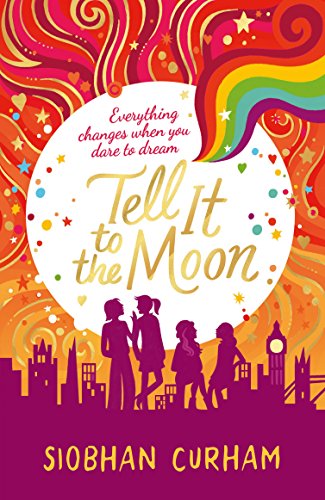 As regular readers will know, most of my children are home educated, and despite growing numbers of children educated outside school, it’s a topic rarely touched upon in fiction. So when I was offered Tell it to the Moon to read and review, and I realised it included a home schooled teenager, I jumped at the chance to read it, and also to host the author on a blog post on the topic.

Home-schooling is a subject very close to my heart and so I jumped at the chance to write about it in my novel The Moonlight Dreamers and its sequel, Tell it to the Moon.

The novels tell the story of four girls who form a secret society, inspired by Oscar Wilde, and one of them, Sky, is home-schooled by her father.

In Tell it to the Moon Sky has to start high school for the first time at the age of sixteen when her father can no longer afford to take so much time off work to educate her.

I was really interested in exploring the school system through the eyes of a teenager who has never been a part of it before. Although bright and eager to learn, Sky is shocked by the regimented nature of school and she really struggles to adjust. Through her character I was able to highlight some of the ways in which I think the education system is failing our young people. At this point I need to make it clear that I don’t believe that it’s teachers who are failing our students but the government. Every teacher I know is deeply disillusioned with the changes that have been made to the education system in recent years – with the obsessive emphasis on targets, administration and results having a detrimental effect on their ability to teach in an inspiring and creative way.

It’s this confidence and free-spiritedness that Sky draws upon when she decides that she isn’t going to let the system break her. Instead, she decides to be the change she wants to see in the world, and starts campaigning for a more inspiring and less regimented education system – where young people are free to be their true selves. My hope is that her story inspires other young people to campaign for an education system that gives them the best possible start in life – with all the advantages of home-schooling.

It’s great to have a character in mainstream fiction who has experience of home schooling (or home education as I tend to call it), but is not exceptional for it. Sky isn’t home schooled because of illness or religion, it just appears to have been an educational choice for her family. (I confess at this point that I’ve yet to read Moonlight Dreamers – the fact that it included home schooling passed me by completely at publication!) She slots into school admirably well – I suppose if I were to quibble it would be around the lack of hassle that this last minute school arrival causes. From experience, schools are a little nervous to put people in to full GCSE courses without prior educational experience, so I’d have thought there would have been a little more red tape to cover on the integration.

Other than that, I like the way the other teens take it all in their stride, I think maybe sometimes it’s us, the parents, that make the bigger fuss. I was a little surprised there wasn’t any mention of the wider home education community – it’s thriving in London, and I’d have expected Liam and Sky to have a support network working towards exams with them. Plus, sitting GCSEs outside school is awkward to arrange, so I’d have also expected there to be some financial commitment to the arrangements already made, unless that’s part of what pushed Liam to get Sky into school. Those are the sorts of things that might be more interesting to parents than teens though, so maybe not the sort of thing Sky would be thinking about.

Teeny logistical quibbles aside, I really enjoyed the book, and am definitely here to cheerlead any positive portrayals of alternative education – Tell it to the Moon definitely falls into that category. There’s lots more to the story than Sky and her school experiences, and I’m going to seek out the first book and read it too.

Tell it to the Moon is published on Thursday 3rd August, and available at all good booksellers, including Amazon (affiliate link)