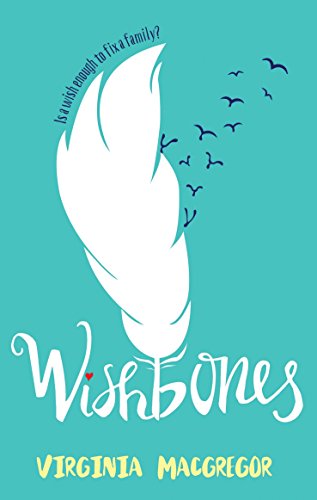 1)To get her mum healthy again

When Feather comes home on New Year’s Eve to find her mother – one of Britain’s most obese women- in a diabetic coma, she realises something has to be done to save her mum’s life. But when her Mum refuses to co-operate Feather realises that the problems run deeper than just her mum’s unhealthy appetite.

Over time, Feather’s mission to help her Mum becomes an investigation. With the help of friends old and new, and the hindrance of runaway pet goat Houdini, Feather’s starting to uncover when her mum’s life began to spiral out of control and why. But can Feather fix it in time for her mum to watch her swim to victory? And can she save her family for good?

Wishbones is a book with an interesting premise – instead of it being the teenager with the eating disorder, it’s the parent. I found Feather to have a really strong voice, and I’m pleased to be hosting an extract from Wishbones as part of the blog tour today.

I was born seven weeks premature. An incubator baby.

I wasn’t meant to survive.

When the nurse put me into Dad’s arms for the first time, he said: She’s light as a feather. That’s how I got my name.

Quack quack, they chant, waddling with their feet turned out.

sneaked onto the ward to ask questions and take photos.

I wonder whether that was what made Mum hospitalphobic – the scare she got from me being so small. And then

I think about her other phobias too and where they came from, like her leaving-the-house phobia and her swimming

phobia and her running-out-of-food phobia.

You were the tiniest baby Willingdon had ever seen, Dad’s told me more times than I can remember, like I’d won a prize. Anyway, it’s all turned out to be what Miss Pierce, my History teacher, calls ironic, because people say the same thing of Mum now – except the opposite: that she’s The Biggest Woman Willingdon Has Ever Seen. People sometimes ask me if I’m adopted. I know what they’re thinking: how can someone so small belong to someone who takes up as much space as Mum?

People are still really interested in Mum and her weight and the fact that she hasn’t come out of the house in years. Last summer, I found Allen, a reporter from the Newton News, hiding behind our hedge with his camera angled at Mum’s bedroom window. He said he’d give me a hundred pounds if I let him take a photo. I told him to get lost, obviously.

Anyway, Mum’s been chubby ever since I’ve known her, it’s just the way she is. What’s more important for you to

know is that she’s the best mum in the world. A mum who’s funny and clever and always has time to listen and doesn’t obsess about stuff like homework and being tidy – or eating vegetables. And although she’s a little on the large side, she’s beautiful, like proper, old-fashioned movie-star beautiful: long, thick, wavy hair, a wide, dimply smile and big soulful eyes that change colour in different lights – sometimes they’re blue and sometimes they’re green and sometimes they’re a brown so light it’s like they’re filled with flecks of gold.

Whenever I think about Mum and how awesome she is and how close we are, I realise that there can’t be many

daughters out there as lucky as me.

So Mum being overweight has never mattered to me. As far as I’m concerned, there are a million worse things a mum can be.

That is, it never mattered until last night, New Year’s Eve, when everything went wrong. Really, horribly wrong

If that’s whetted your appetite for the rest of the story, I’m not surprised. It’s one of those books that you find yourself just reading a couple more pages of until suddenly you’ve read it all. If you’d like to win a copy for yourself, enter via the rafflecopter widget below, and good luck!