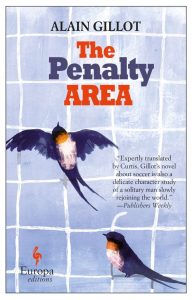 A heart-warming novel about overcoming adversity, making human connections, and football. Vincent once had a shot at becoming a professional soccer player but a career-ending knee injury put an end to his dreams. A tough kid from a poor family, he has become an emotionally cut-off man with frustrated hopes and limited options. He finds himself coaching an under-16 soccer club in an attempt to keep alive his only passion in life. The team he coaches is little more than a roster of hot- headed boys, none of whom understands the on-field chemistry needed to win. Simply put, they aren’t of a championship calibre. When his unemployed sister Madeleine, a single mother, dumps her thirteen-year-old son on him, Vincent panics. With no clue how to take care of a teenager, he brings his nephew to practice and eventually throws him into the scrimmage. It’s then that Vincent notices there’s something strange about Le?onard. He has a preternatural ability for anticipating each striker’s intentions, making him a remarkably talented goalkeeper. But Le?onard looks detached, absent, lost. Le?onard has undiagnosed Asperger’s syndrome. What is equally clear is that, with Le?onard’s abilities as a goalkeeper, Vincent’s ragtag team has a chance to reach the finals. For that to happen, for the team to find a reason to rally behind this strange kid from Paris, Vincent will have to let down his guard and open his heart for the first time ever.

Please be aware that this review may contain partial spoilers in order to go into more detail than I usually do. In case you don’t want to read those, I’ve put them behind a read more link, and the TL;DR summary of the review is that I wouldn’t describe this book as heartwarming or engaging, but it’s an interesting examination of a fractured family and potential routes to recovery. The description of Asperger’s sydrome is perfunctory and stereotypical, but plausible (as long as we recognise that it’s the description of one person’s presentation, not all of them) and Le?onard is the character I’d very much like to have seen more of. Note I am NOT describing anyone having a diagnosis of Asperger’s Syndrome as being damaged/ fractured or broken, but I think pretty much all the other characters in this book are one or other of those things. With that said, I did really enjoy the book, in a kind of “sigh of relief yay the end is better than the beginning things are looking up” way.

Described on the back cover of the proof I received as a warm and engaging read, the Penalty Area doesn’t really sound like a book I’d have a lot of interest in. My football fan days lapsed when I moved away from Durham and lost what personal connections I’d had with Newcastle United, and heartwarming isn’t actually a category of book I turn to all that often.

However, I didn’t read the back cover and just got stuck in. And if I had been expecting warm and engaging, I’d have quickly been disabused of that, as I would say the book is quite bleak in places (description of a descent into depression comes 3 pages in), and a twitter conversation about heartwarming backed me up in thinking that while you might get some mild peril/ stress, the overall feeling should be positive. Vincent, our main character, didn’t just come from a poor family, there was domestic violence and physical abuse, which along with the injury that ended his football career means he’s pretty bad at the whole relationship thing, and has pretty much settled for a mundane and lonely existence as a football coach to a bunch of teenagers he doesn’t much like.

Vincent has a sister with other ideas though, and she whirls in and just as rapidly out of his life, dropping off a 13 year old complication in the form of Le?onard his chess obsessed and routine driven nephew.

Le?onard and football might not seem like the ideal combination, but Vincent sets to persuading him otherwise, starting with analysis of tactics by watching some of his large collection of football DVDs. Encouraged to take part, Le?onard displays an uncanny ability to analyse the play in front of him, but when an altercation with the other players ends up in an injury they take a trip to A&E where the doctor suspects something is a little off and brings in a child psychiatrist, who diagnoses Aspergers Syndrome. (Given how difficult the diagnostic process is to access in the UK, this turn of events rather surprised me, but I’m told it is plausible for France, which doesn’t go for the multi meeting multi disciplinary approach at all.)

From some internet and twitter based research, it seems that France may be lagging a bit behind the UK in terms of how it classifies and treats autism – Asperger’s is still very much in play whereas here it’s been subsumed under the overall Autistic Spectrum Disorder label. As this book was originally written in French, I’m assuming the author is working from those understandings, and that explains some of the grating approach to Aspergers generally. Vincent takes all this in stride, though, and although there’s a lot more to go on before we get to the end (including a family reconciliation and death (heartwarming??)) Vincent and Le?onard’s developing relationship is to me the gem in this book.

Don’t read this hoping to get an insight into autism, although some of the descriptions are apt – but at the same time it’s no more of an incidental plot point than cancer, historical abuse and emotionally stunted adults are. Probably a step forward on some books featuring autistic characters to be honest.

Do I recommend this? Overall, yes, but do be prepared for a bit of bleak alongside the heartwarming/ engaging bits. (If anyone else has read this and is prepared to offer their opinion I’d love to hear it in the comments.)

Published by Europa in September 2016, available at Amazon (affiliate link).