This Thursday, I’m helping host a We’re Going on a Bear Hunt twitter party. There will be tweeting, from UKMumsTV and if you want to find out more about it all, just click on the party button above.

I’m guessing that most of my readers are already familiar with We’re Going on a Bear Hunt the book. Written by Micahel Rosen and illustrated by Helen Oxenbury, it’s an absolute classic, very join in able if you know what I mean. It isn’t read quite as often as perhaps it could be in this family because it’s felt there’s a slightly sad undertone to the ending (spoiler alert) where the bear goes back to his cold dark cave all on his own.

Nevertheless, I was really looking forward to watching the film, particularly as I’d seen a Michael Rosen interview about it all some time over Christmas, and it sounded great. Smallest was a little more reluctant – she’s a sensitive soul, and is easily overwhelmed by her emotions. I got the book out and we looked at the pictures on the DVD and the book, and she was a bit interested by the similarities and differences, and then when we started watching, she was very taken with Rosie, who takes the lead in the book story. 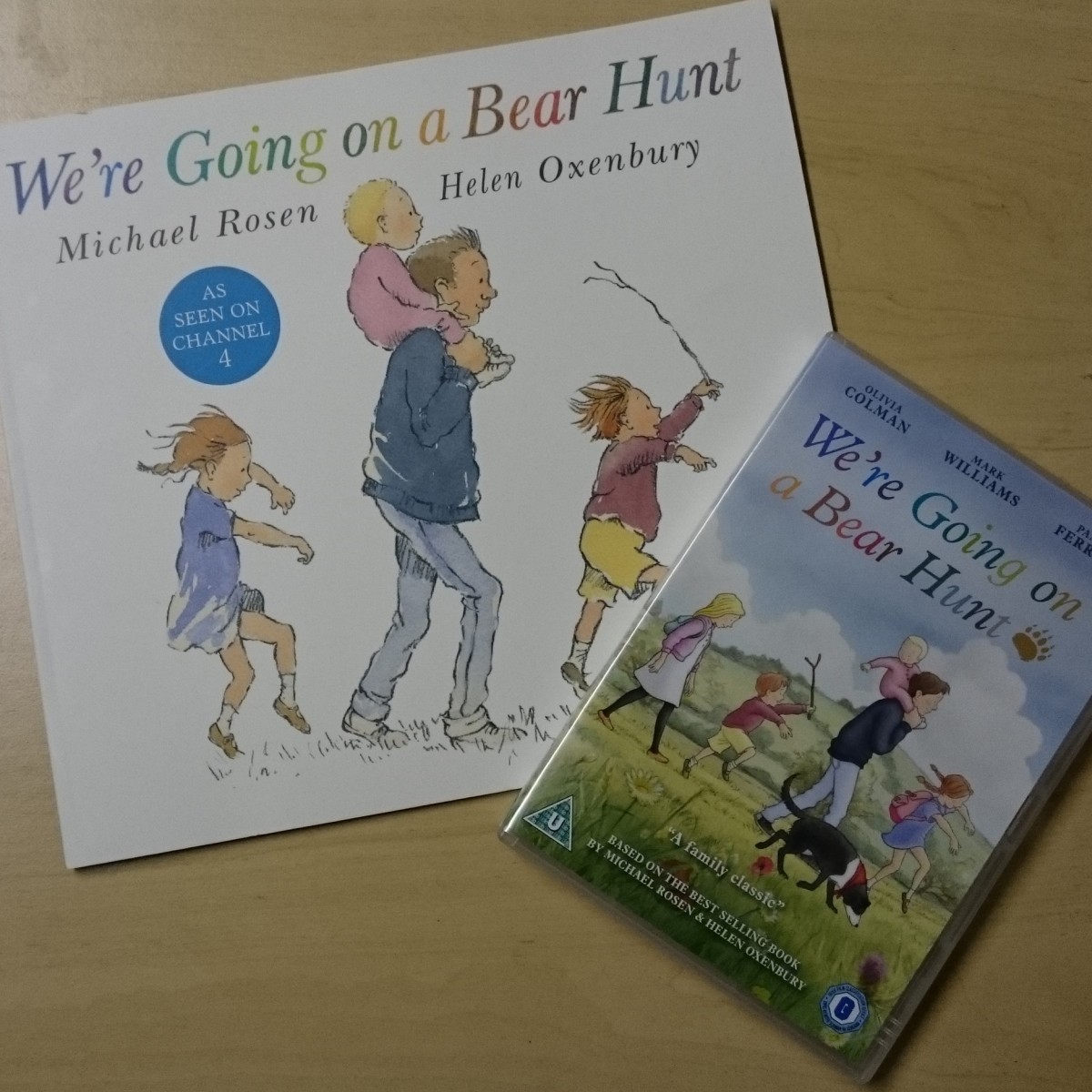 There is an extra layer to the story in the film as opposed to the book. I’ve always looked at the characters as being a group of children with their dad – in the animation Mum and Dad rush off to rescue Grandma who has broken down, leaving the oldest child (teen well on his way to adulthood) in charge. There’s a passing reference to Grandad would have known what to do, and suddenly we’re also missing Grandad.

Smallest wasn’t born when Tim’s parents died, but she still feels their absence acutely, so this additional sadness didn’t help. However it was easy to coax her along by spotting the scenes from the book in the film, and it is very beautifully put together. The style is a little tidier than the original illustration, but the characters are very authentic to the originals. It’s interesting to see them come to a little more life with someone else’s interpretation although in some ways a little frustrating too.

The bear though. Oh the bear. Growled by Michael Rosen, he is just lovely, and Rosie adores him – there is interaction between them which is very different to the book. Which makes the ending more difficult to take, and even with the additional family scenes I have to admit there were tears.

I can see that this version of the story could be very useful to use with children dealing with sadness over the loss of grandparents (or other relatives for that matter) but in some ways I do wish it had stuck closer to the book. Swings and roundabouts though, and like I say, it’s beautifully done.

I also very much enjoyed the making of featurette, which has details on the animation techniques used, shows the children who were models, and has interviews with both Michael Rosen and Helen Oxenbury (good to see the illustrator involved). It also discusses the song Me and You, used at the end of the film, written particularly for the animation by George Ezra. (I’d never heard of George Ezra before, sorry to his legions of fans.) It was interesting to hear how that was supposed to lift what is accepted to be a sad ending, but Smallest picked up on the lyrics about people going away, so it didn’t quite work on her.

All in all, I did enjoy this animation, but for those of with children of a delicate disposition, you’ll need to watch with tissues.