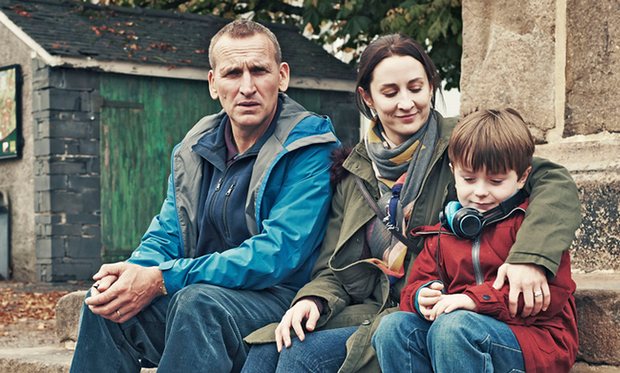 So. BBC one showed a new drama, The A word, last night about a family discovering their son has autism.

It’s very well acted – unsurprisingly given it includes Christopher Eccleston on fine, if somewhat grumpy form (possibly because he seems to suddenly have become old enough to be cast as grandad, which must be a bit of a shock for all concerned). The young lad playing the autistic boy in question is playing what he’s been asked to play very well.

Despite articles raving about it (The A Word is a beautifully believable drama about autism and family tensions is just one of the many I found) I’m personally having a few problems believing it.

Within this family, we’ve been through the diagnosis process 3 times.

First time around, the GP, who seemed to have his own belief issue with autism as a condition insisted that the problem was down to a chronic ear infection, saw us monthly for 3 months, and then prescribed 6 months of penicillin. I didn’t fill the script, did transfer to a different GP and finally got the referral that we actually needed. The child in question had had his hearing tested regularly throughout childhood, received speech therapy for lack of speech, and was at the time I caved and sought referral beyond being a handful and was regularly physically attacking me if I attempted to thwart his wishes and do something like get him to leave the house. There were other clues that all was not well, but this is supposed to be a normal length article.

I know I don’t know every autistic child (or indeed person) on the planet, but I’ve seen a fair few meltdowns and I don’t think I’ve ever seen one that resulted in the child lying quietly face down on the floor. Or just slapping someone once and then stopping in apparent shock.

Also, during the diagnostic interview in the programme, the doctor(?) asked for school reports, and the family said oh we didn’t bother with those. And then the diagnosis tootled on? I know quite a lot of home educating families who have been told that they can’t access diagnosis as the child isn’t in school and it can’t happen without educational reports. (Which is wrong, incidentally, but unfortunately for a lot of children, medical professionals do not know everything, and very often are prejudiced against anything outside the norm. Our paediatrician was a lot more clued up, and just visited us at home and him at beavers, in order to see him in a social situation.)

What I’m trying to get at is the diagnosis procedure in the program wasn’t in the slightest bit believable. Ignoring the lack of educational reports, it missed out the stage where the parents, tearing their hair out, are either fobbed off, put on a waiting list, lied to, or told that it’s just poor parenting and they need to attend classes. Yes, all of these things happen and accessing diagnosis can take a very long time. (Do NOT get me started on accessing support.)

Oh, and despite us being told that this isn’t yet another Rainman lookalike, it *is* about a little boy with savant like skills for learning music lyrics.

Please. Please be aware that autistic people can be male, female, young, old, bright, not so bright, have learning difficulties or not, often have a variety of co morbid diagnosis like epilepsy or joint issues (look up Ehlers Danlos and weep) and so on and so forth. What they rarely are is savants.

Yes, yes, I know the A word is fiction. But it’s fiction that once again cements a stereotype in place, and means that people like me – female, adult etc will be told more often that I can’t be autistic. Like I was by the GP I approached to access diagnosis myself, who couldn’t get me out of the room fast enough.

He was wrong. I am. And many more people are going to be misled by this, and it doesn’t help any of us.

(And as for the throw away prejudiced remark anti home schooling in the trailer for the next episode – really? Just what does the BBC have against home education??)

The most recent instalment of my experience of autism past diagnosis “Autism, anxiety and mindfulness” You can find everything I’ve written on autism by checking out the autism tag, linked below the post.