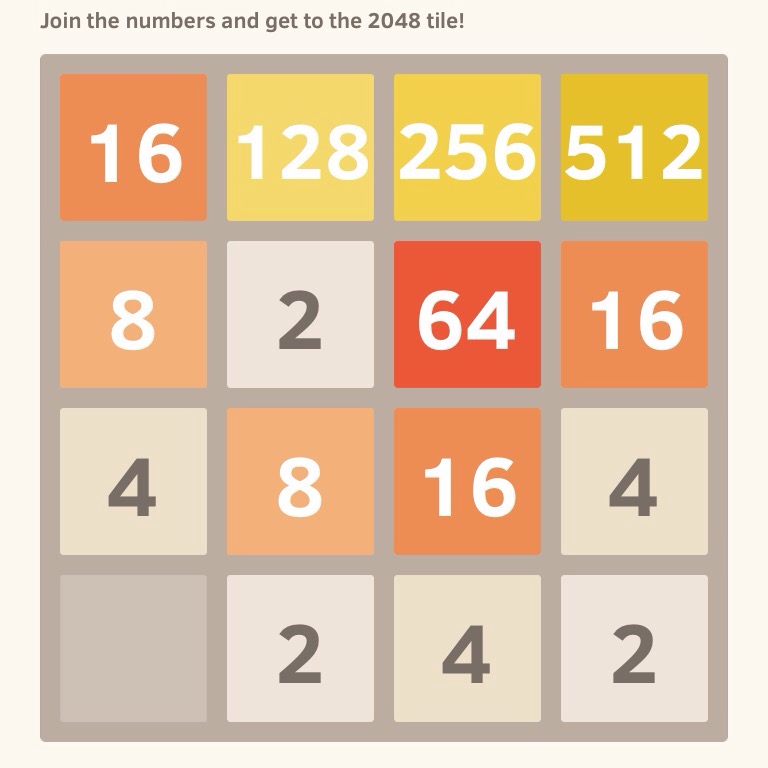 Have you ever played 2048? It’s a horribly addictive number tile puzzle game, you slide the numbers about and they double up when they touch matching tiles. You’re trying to get to 2048, and of course if you achieve that, the target doubles.

Did I mention it’s horribly addictive? Just one more go. Suddenly it’s 3 hours later, your backside is numb, the wet washing is still in the machine, it’s dinner time, you didn’t blog and you still haven’t reached 2048…

My brain works a lot like the game. I slide from topic to topic making a little progress now and then almost incidentally, but more often than not just getting terribly frustrated and cluttered. Part of the reason I get in a tangle though is because I’ve been trying to do things the ‘right way’ and I’m beginning to realise I’ve been looking at that idea all wrong.

Instead of fighting it, I’m using it.

If you are the type of person to bounce from idea to idea, go with it. Instead of trying to force yourself to one target, get into a rhythm of doing a bit with each thing you turn to. The best success strategy is to always make it a little better, or if you can’t do that, at least don’t make it worse!

As an example, if you’re washing up, before you get distracted and wander off, make sure you finish the bowl full, empty it out and wipe the sink. That way the next time you get around to it it’s a lot easier to get started on doing it successfully.

Try to get more done than you think you can. So if you’re distracted by your email popping up on the phone, don’t just read the one interesting one and ignore the rest. Delete all the ones you aren’t ever going to read (if you’re feeling really energetic, unsub from a few while you’re at it!) and like the sink, next time it will be easier to face your inbox.

Sometimes good enough and done is better than perfection unstarted.

I’m a perfectionist, and also a master procrastinator. These two super powers often mean that things just don’t get started and I exist in a state of panic that whatever I do will never be good enough. However, I’m trying to rmember that good enough is better than nothing at all. And while Amazon might be able to cope with an on demand business strategy, I’ll work better if I do something now while I can, instead of leaving it until I almost can’t do it at all.

So what do you think – any of those tips work for you? Or do you have any you would add?