Tigerboy is 3 and 4 months, and until today, he’d never had a haircut.

He never wanted one. It was his hair, and I thought it should be his decision. And yes, I loved his gorgeous blonde locks, so very soft and fine.

Occasionally it annoyed him by getting in his face or mouth, and I offered that he could have it cut, or wear it in a pony tail. Sometimes he did let us tie it up, most of the time he just brushed it out of his face and got on with doing whatever, or did a bit of screaming, and *then* got on with things 😉 He did quite like being a samurai at times.

And then today, Tim said that he was going for a haircut with Small, and did Tigerboy want to go, and he said yes.

So I took him and showered him, washed his hair and brushed it, and asked him how he wanted it cut.

And he said he wanted boy hair.

I was a bit taken aback by this, as I’ve always told him that boys and girls can have long or short hair. He does know other boys with long hair, though not many, but increasingly, people have confused him with girls, and other children have referred continuously to him as a girl, even when corrected. And he didn’t like that very much. (It’s a whole different thing to discuss whether being mistaken for a girl should be a problem or not. He knows he is a boy, and got cross that people got it wrong. Things are supposed to be right.)

I reminded him that boys could have long hair, and he said no, he wanted normal boy hair.

So that’s what he has now. Beautiful, blonde, short, normal boy hair. Cut very much like his big brother.

And I’m a tiny bit sad. He looks wonderful – it does really suit him. And he’s very happy with it, so that makes me happy for him. But I’m kind of sad that even at the age of 3, and even in a pretty non conformist family, the deciding factor for him to have his first hair cut was effectively to fit in with other people’s expectations.

Makes me think, we talk a lot about the pressures that society puts on our little girls. But are the ones on little boys causing just as much of a problem? 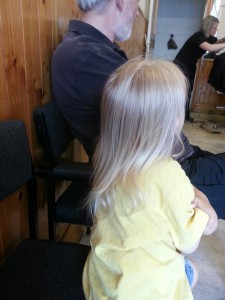 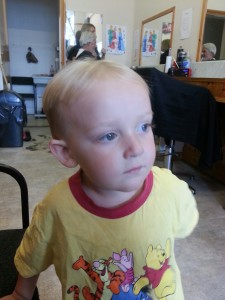