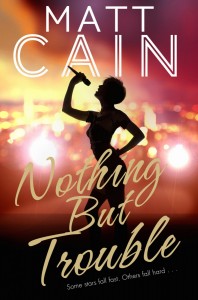 Lola Grant is the hottest pop star in Britain and she’s about to go global. But behind the music, her addiction to bad boys is taking her personal life in a dangerous direction. When it comes to men, Lola just can’t stay away from trouble – and her self-control is pushed to the limit when she meets her handsome new drummer Jake Hunter.

Looking out for Lola is her best friend and manager Harvey Sparks. But Harvey’s fighting his own demons and can only watch from the sidelines as the star he helped create begins to fall. When Lola seeks comfort in a life of wild partying, she meets good-hearted showbiz reporter Freddy Jones, a man who may just be able to offer her a way out.

But as she starts rehearsals for her Trouble tour, Lola finds herself faced with an even bigger threat. And unless someone can get through to her before opening night, she’s in danger of losing everything she fought so hard for – in full view of the whole world.

I’m really pleased today to be taking part in the Nothing but Trouble Blog tour celebrating the release of Matt Cain’s second novel on 16th July.

Make notes all the time

I’m always surprised by how much detail I need to create the fictional world of a book – and how quickly my tank of ideas runs dry. So I make constant notes when I’m out and about. These might be about the way someone looks, a particularly name or a turn of phrase I think I can work with. Having said that, if people realize what you’re doing they tend to become self-conscious so I don’t carry around a notepad and pen but tend to type my observations into the notes section on my iphone. Although people do sometimes complain about me sending a lot of texts!

When you think you’re ready to start writing a novel, wait a bit longer

I try to think about a book for about six months before starting writing. I imagine the characters I’m going to create and flesh out their backstories, do any research that’s necessary and plan out my plot in as much detail as I can. Funnily enough, I find that when I’m preparing to write a novel, even when I’m not aware of actively thinking about it, ideas are mulling around the back of my mind and taking shape. But one thing I’ve learned is that when I feel those ideas are ready to come bursting out of my head and onto the page, sometimes they aren’t quite there yet – and it’s much better to wait a bit longer. That way when I eventually sit down and start writing I find the idea for the book has been going round in my head for so long it’s like it almost exists already – and it flows so much better it almost writes itself.

Try to write every day

When I wrote my first novel Shot Through the Heart I was working full-time as the arts correspondent at Channel 4 News so I had to fit my writing around my job. It was so hard to keep stopping and starting; every time I had to leave behind my various plot lines or running themes or consistent character traits it would take me a whole day to pick them up again and get back into the flow of things. It was very frustrating. But I was lucky enough to write my second novel, Nothing but Trouble, in one continuous stretch, starting the week after I left Channel 4 News. Working on it full-time and writing six days a week made such a difference. It was so much easier – and so much more fun!

Even though I’ve just said that writing my second book was much easier than writing my first in fits and starts, one thing I did notice when I wrote Shot Through the Heart was that my job at Channel 4 forced me to step back from the novel on several occasions and view it with a fresh pair of eyes. And this is a really important part of the process. When I finished Nothing but Trouble I was so excited about it and how easily it had flowed I thought it couldn’t be improved. It wasn’t until I left it for six weeks and then came back to it that I saw what was wrong with it and could start making it better.

Show your first draft to someone you trust

Nowadays I’m lucky to have a brilliant editor and agent to go over my work and tell me how I can make it better but before I had a publishing deal I had to rely on friends. I found if I showed it to too many people this could be counter-productive; it was much better for me to select one or two whose opinion I really trusted and then work through their feedback. But if you’re doing this, remember that all their suggestions won’t be right – although if they pick up on something that isn’t working in the book, even if the reason they give isn’t the right one it’s usually true that they’ve highlighted a problem you need to look at. And don’t forget that if you leave your work for six weeks and do another draft yourself you might find you can solve some of these problems yourself before showing it to other people. Remember it’s a big imposition to ask someone to read a whole book and they’ll only do it once – so make sure it’s as good as you can get it before you hand it over!

Good luck and I hope to get the chance to read your books one day!

I’m kicking off the tour, and there are loads of other brilliant blogs taking part – details below. 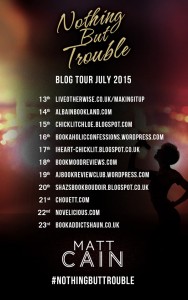