I’m very pleased today to be taking part in the blog tour for Edoardo Albert’s second book, Oswald, Return of the King. 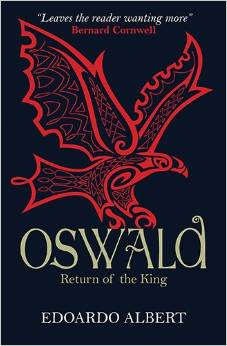 The exiled family of King Aethelfrith of Northumbria arrive, after much hardship, on the island of Iona, where the monastery founded by St Columba has become a centre of worship and learning. Young Oswald becomes firm friends with a novice, Aidan. When Aidan professes his final vows, Oswald and his little brother Oswy are received into the church. As befits a young prince, Oswald learns to fight. However, Aidan’s example attacts him and he is on the point of deciding to become a monk when news reaches Iona that his half brother, Eanfrith, has been killed by Cadwallon, the king who defeated Edwin. Oswald sails back to Northumbria and meets Cadwallon in battle, defeating and killing him. Oswald, now undisputed king of Northumbria, gives Aidan the island of Lindisfarne as his base. But Penda, the last great pagan king in England, is raising troops against him

As I said, this is the second book in the series, and I haven’t quite caught up on my reading after being away (I took books with me, I did!) so I can’t do you a full review. What I can say is that the books are very obviously heavily researched, and thoroughly grounded in the history of the time they are portraying. As regular readers will know, history is a bit of a passion of mine these days, so I asked Edoardo to tell me how he goes about the research that make his books so believeable.

Paul Gething, archaeologist, picked through his finds. It turns out I had, literally, been walking on history.

An inestimable advantage to any writer of historical fiction is having, as your brother-in-law, an archaeologist who not only specialises in the area you are writing about, but who who, in fact, is excavating the very castle that plays a central role in your story.

We were standing on a path down from the great crag of rock upon which Bamburgh Castle squats. Paul had just told me that most people are oblivious to what lies beneath their feet and I had asked him to prove it. Within three minutes that was what he’d found.

“People have been here since Neolithic times, so it’s not hard to find things. People drop litter now, and they threw away their rubbish then; we’ve not fundamentally changed over the centuries.”

Fifteen years ago, I’d driven north with my family to visit Paul and see this dig he was directing. The Bamburgh Research Project had already featured on Time Team and Meet the Ancestors, so I thought we should see what all the fuss was about. Turning north from Seahouses along the coast road my jaw, quite literally, dropped open as I saw Bamburgh Castle for the first time, dominating land and sea and sky atop its outcrop of the Great Whin Sill.

Paul and his team were rewriting the history of Northumbria, but few people knew of it, so we collaborated in the writing of a non-fiction book on what they had discovered: Northumbria: the Lost Kingdom. And I learned even more from our hours of discussion.

Standing, looking over the ramparts, Paul pointed down to the broad expanse of sand in front of the castle. “That wasn’t here in Oswald’s time. The sea came right up to the base of the rock. We think they beached their boats in a shingle cove below St Oswald’s Gate.” He pointed. “That was the only way in. Or out.”

I learned the history of Northumbria, of its kings and saints and its ordinary people, in a way those very people would have recognised: in conversation and debate, over mugs of beer and during walks by the sea. I hope, in these stories, to have done justice both to these stories, and to the work of Paul and the many other archaeologists and historians who have laboured to shine a light into a time that was once called the Dark Ages but now, thanks to their work, is a lot brighter.

Fascinating stuff, I’m sure you’ll agree – and gives you a hint of the quality of writing in these books. For more information, do visit the other blogs on the tour, or look Edoardo up on twitter or on his website 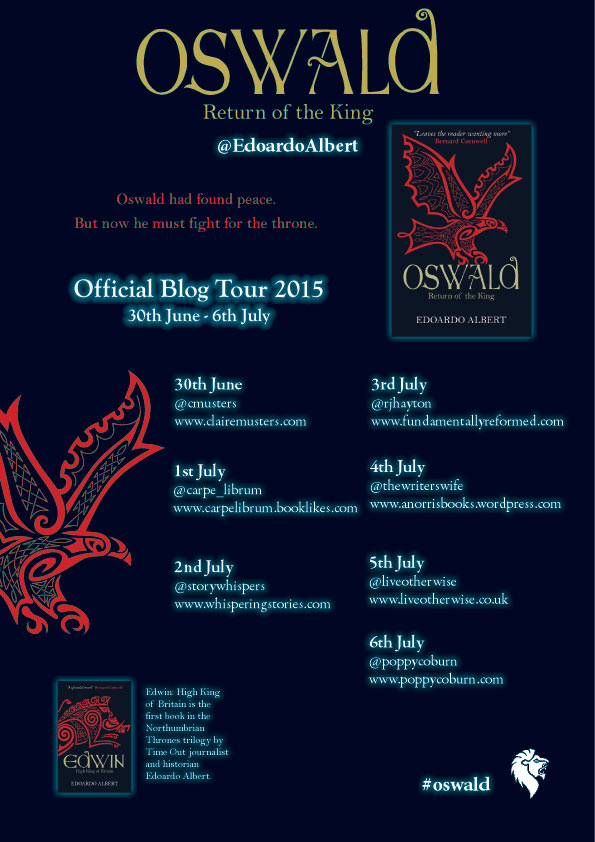