We’ve slipped out of the arty habits we were gradually getting into. The small children are trying for screens earlier and earlier in the day. And I’m not drawing daily.

Today didn’t have an auspicious start. I’d had a warning of potential bad news last night, and the bad news itself followed rather more promptly than expected. It put me in one of those sad moods not easy to shake off.

Smallest is a determined child though. And she wanted to do things, starting with the XYZ blocks again (see full review here). She was quick to start working out how to build blocks from a flat net, with minimal guidance – she needed some help with the first couple but then was fine. Until Small annexed half the tiles so that he could build a big cube. He was tempted to go for the 4x4x4 which would take up all but 4 of our tiles, but with Smallest using more than that already, he went for the 3x3x3. It took him a while, but he did it.

It appears to be against some natural law to have @xyzbuilds tiles out with only one child. Instant attraction for rest of family! #xyzbuilds #STEM #constructiontoys #100homeeddays

Shortly after they were done with the tiles, Smallest was back, this time with a Miles Kelly Mini Encyclopedia Birds

. She has always liked birds. From the time she could manoeuvre herself to the windows, she would sit and watch birds in the garden. And her favourite magazine was the RSPB birdlife magazine. The first one we had she wore out, going through the page over and over again.

Today she wanted to draw birds, so she settled down with pencil and paper and the book wedged open, to reproduce what she saw.

Except she couldn’t. And I could see her starting to get frustrated, so I fetched a stack of picture books with birds in, ranging from Naked Trevor

(I can totally see his bottom!) to Yeti and the Bird

(Groooo!) Seeing that so many different books represented birds in so many different ways cheered her up immensely, and she started out afresh, drawing a bird named after herself, which apparently likes pretty things and is green. 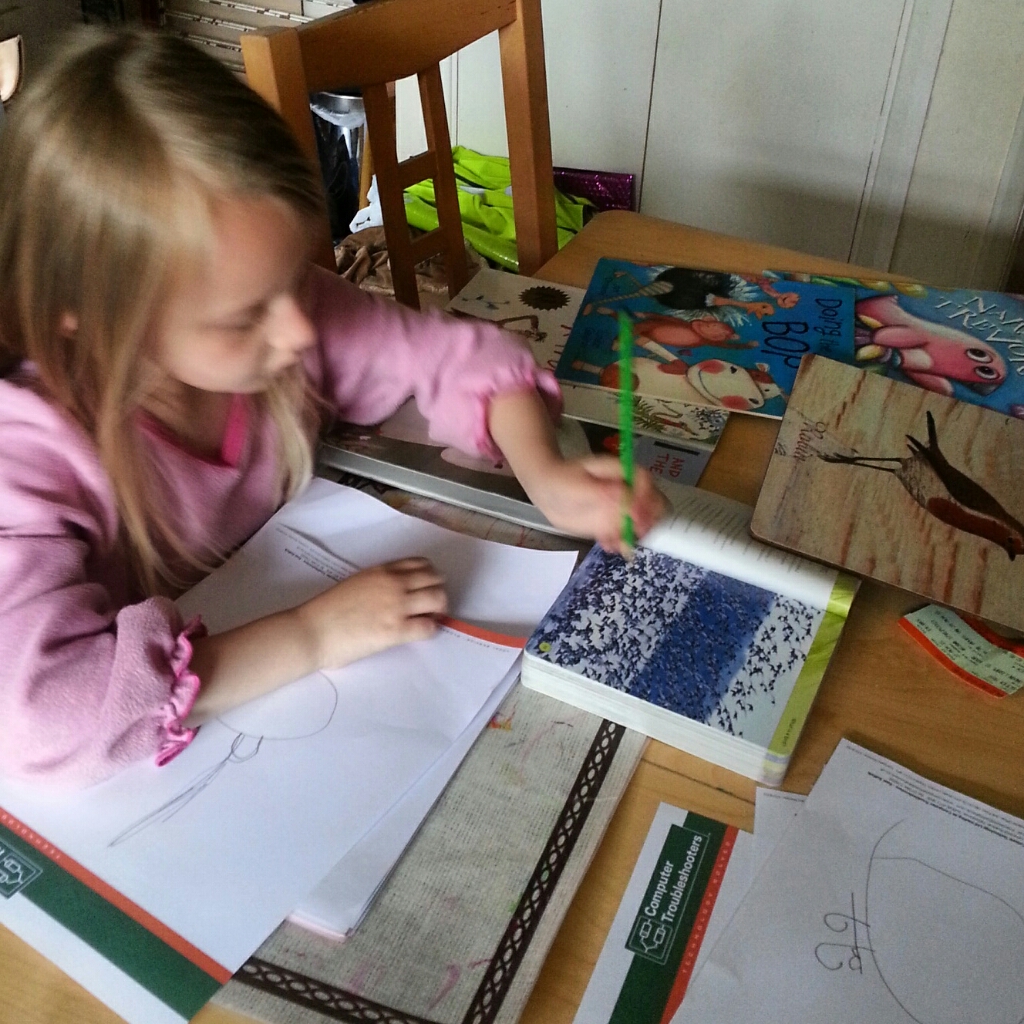 Eventually she was done, and I finally got the table set up for some 1920s dress making. There was a slight pause while I located my dress making shears. (On the plus side, the hall table is much tidier now. Sigh.) Then there was a longer pause while I located my courage. I *hate* actually cutting fabric. I’m very glad we’re doing a dry run in linen though, as when I transferred the pattern from the sheet dress we discovered again that Big’s shoulders really are quite uneven. Council of war around the table as Tim was drafted in – his degree in architecture isn’t that far from dress design is it? 😉 We’ve got a working pattern now I think though, there will be sewing tomorrow.

So the day, in the end, was rather more productive than it started. Particularly when Small reminded me at the dinner table that he wants to learn Latin. So that’s tomorrow’s project started then!

And with that in mind, I’d better head to bed.