A little while ago, I set Small a project – to explore the Second World War primarily through fiction. To get him started, I dug around our shelves and our many secondhand bookshops, and I found a few good titles. The first one he started was Carrie’s War. 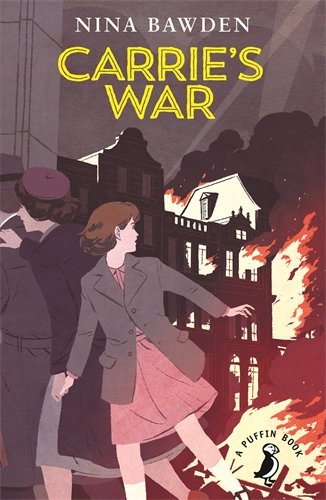 Oddly, I’d not actually read this one. Small read it today, in a hurry to get back to screens 😉 and then declared it boring. I suppose it is very different to the sort of thing he reads for himself, but to be sure, I picked it up and read it this evening.

If I compare it to the sort of thing Small chooses – Wimpy Kid, Alex Rider, the pacing is completely different. He complained that nothing really happened – for all it’s set during the war, the action is all at a personal level. Carrie’s war is a story of families and strangers, and how they are brought together and torn apart.

I can quite see why Small didn’t go for it. He didn’t notice the undercurrents of conversations, the small happiness and sadness of day to day life. He also didn’t really notice any of the details like children sliding on trays down the slag heap, or parents dying in accidents in the mine. He doesn’t read a book at that kind of level, and that’s not so surprising, given that we’ve not talked about books the way I do with Big.

I’m hoping to change that now, by starting to read alongside him. I listened to the first 6 Alex Riders on trips to and from Scotland over the years, but I’m a bit behind with them, and I’ve never read any Wimpy Kid. We did try out having a family book club a little while ago, and read Boy in the Striped Pyjamas and Wonder. Wonder was a rather more popular choice – Small still hasn’t really forgiven me for Boy. There have been other books he has enjoyed – perhaps I’ll like the Pendragon Girl series, as he certainly did.

When I suggested the world war II project to him, my ulterior motives were to broaden his general knowledge, and his reading horizons. Now my motivation is to share the fictional journey with him, which I think is a rather better starting point. I daresay he’ll learn stuff along the way, but it probably won’t be the things I might expect, and I’m sure that I’ll learn a few things too.

Do I recommend Carrie’s War? On my admittedly quick read tonight, perhaps it has a stronger appeal to adults in some ways, although a quick search online tells me it’s often used at KS2 – you can get resource books (like Carrie’s War: KS2 (Read & Respond)

) and everything. (Hint, I haven’t. But if you’d like to use any of the affiliate links in this post, do feel free 😉 .) I have to say, I really rather enjoyed it. It is a quick and easy read for an adult, and there’s nothing overly traumatic in it, particularly given it’s a war story, and it’s very nicely put together, with good characterisation, and lots of evocative moments.

I’d love to hear the opinion of someone who lived through those experiences on it.

Tomorrow I might build a page with a booklist on it, we’ve a few titles kicking about already. Do feel free to drop suggestions in the comments through, always looking for more books to read 🙂