Warning. This is more of a meandering through my memory than a classic review. It is not guaranteed spoiler free, though hopefully I’ve been subtle enough to whet your appetite rather than blow the whole plot. Bear that in mind if you choose to read on. 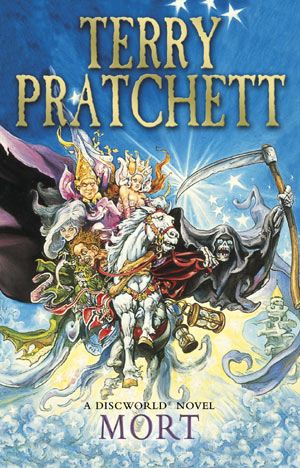 When I signed up to the Terry Pratchett blog tour to review Mort, I was really looking forward to sharing a picture with you of my signed copy. It’s very personally addressed, it says: “Dear Jacquie, you have to be 18 to read this. Terry Pratchett.”

That’s because it was given to me by a couple of close school friends, for my 18th birthday. They went all the way to a signing with him, and got it specially for me.

I can’t show you a picture though, because it’s hiding. There are a *lot* of books in this house, and more in the garage, sadly, and I don’t know where that much loved and rather battered copy is. (I could swear it was in the bedroom on the top shelf, but I can’t find it there.) So that means that I’m mainly doing this review from memory, because would you believe, in a town with 9 charity shops (or maybe more, I’m not sure) and two secondhand bookshops, there wasn’t a single copy of Mort to be had? There are hardly any Terry Pratchett books out there in fact, and considering how many books he wrote, that is kind of impressive. People don’t give up their Terry Pratchetts.

When I moaned a little on twitter about not being able to source a book for a quote or two, several of my friends offered help. One thought she might have a second copy, but couldn’t find it. Another took pictures and sent them over, so that I could put the right words in here, rather than my half memories.

Half memories, because I first read this book over 25 years ago. I’ve read it a few times in the intervening quarter century, but I’ve read a lot of other books too.

And yet Mort sticks with me. Something about the character, about that helpful boy….

It wasn’t that he was unhelpful, but he had the kind of vague, cheerful helpfulness that serious men soon learn to dread. There was something infectious, possibly even fatal, about it. He was tall, red-haired and freckled, with the sort of body that seems to be only marginally under its owner’s control; it appeared to have been built out of knees.

You can see him, can’t you? You know him now.

I think the strength of Terry Pratchett books might be in that wonderful turn of language, situating his characters in the utterly bizarre, but making them absolutely human.

Even Death. Even the Grim Reaper, who SPEAKS IN CAPITALS, who it turns out, accidentally adopted a daughter, and decides to take an apprentice.

The scene is set for a comedy of errors, or manners, or maybe a tragedy?

Or all of those. Because the other thing that Terry Pratchett knows, and writes, is that life is complicated, and funny, and sad all at once.

Mort grows up. And things change.

‘Something’s happening to you.’

I KNOW, said Mort, ‘But I think I can control it.’

Which all leads up to my all time favourite quote of the book.

I’m guessing that most of the people reading this post will be Pratchett fans. But if not, if somehow you’ve never tried him, or worse, tried once and didn’t like it (I do know it happens. Odd though it is 😉 ) I’m here to say, give it a go. Mort is an excellent place to start. OR END.