Reviewing A Pony in the Bedroom: A Journey through Asperger’s, Assault, and Healing with Horses by Susan Dunne.

In trying to understand my own diagnosis of Aspergers syndrome (autistic spectrum disorder) and what effect that has had on my life, I’m reading as many books as I can by other autistic people. Susan Dunne grew up with undiagnosed autism, and an obsession with horses. As did I. But I had dogs, and books and I got my horse in my teens, for a couple of years at least. I wonder, reading this, how different I might have been without her. 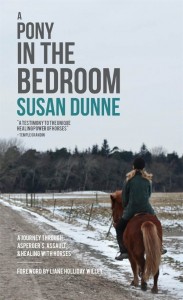 Susan’s story is bluntly told, with understated humour, that does little to downplay the brutality she lived through. Her lack of social imagination or understanding of social cues made her massively vulnerable at times, but she has what I’d call a stubborn streak that keeps her going. She is also very independent, as well as solitary, which has allowed her to travel the world in ways I’m oddly envious of, but it’s an independence which has kept her remote from deep human friendship through most of her life.

At times that remoteness put her life in danger.

This is not an easy read. It’s not a comfortable read. And I knew that (the clues are in the subtitle), and so kept kind of circling round the book, a little reluctant to pick it up. I knew that once I did, I wouldn’t want to put it down.

I was right. Once I got going, I read it in a day.

In lieu of human friendship, Susan found something different. Dogs, and then finally the horses that she was never allowed in her childhood. How she comes to them, and what they do for her, on both a physical and emotional level is something I’d like you to experience for yourself, so I won’t go further into it. But I will say, that despite the pain that is readily shared throughout Susan’s story, that’s not what I took away from it. This isn’t a book that leaves you with a there but for the grace kind of feeling, instead I feel admiration for a person who went through everything she went through, and now reaches out to other people to bring them comfort too.

Unlike previous books I’ve read and reviewed, such as Nerdy, shy and socially inappropriate and Pretending to be normal this isn’t written up as any kind of handbook to offer advice to those of us getting to grips with our autistic selves as adults. But there are still plenty of lessons to be learnt here, and the oddest thing about it? It was good to read a book from a woman in the UK. Sometimes it feels that we are lagging behind the rest of the world in our understanding of, and writing on autism, so reading a book set in places I know, and speaking the words I grew up with meant a lot to me.

Thank you for writing Susan.

Disclosure: the book was provided for review by JKP books, and links are affiliate links. See more at their website.