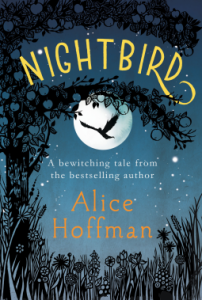 Twig lives in a remote area of town with her mother, baker of irresistible apple pies. A new girl in town might just be Twig’s first true friend, and ally in vanquishing an ancient family curse. A spellbinding tale of modern folklore set in the Berkshires, where rumours of a winged beast draw in as much tourism as the town’s famed apple orchards.

This is a book aimed at a younger audience than the ones I usually read – maybe this is middle grade? (I get a bit lost off with all the different categorisations to be honest, probably a bad thing to admit as a book blogger!)

Nevertheless, I read this last night and I very much enjoyed it.

It’s quite a gentle, hopeful story, about lost souls, friendship, difference and loneliness. There’s a mystery, and a monster, and a 200 year old curse – witchcraft and broken families with secrets, and a town with a problem. All sorts of things all tangled up together, but somehow it all works together without feeling overloaded.

Putting it like that, it sounds rather more drastic than it reads. Perhaps to a younger audience it will be a little more enthralling, to me it is a fable, as the resolution feels rather less plausible than the story almost. (Yes, I can cope with mysterious winged beasts, monsters, witchcraft and curses, I’m less happy with the ending which of course I’m not going to spoil here. In fact, I’ve even edited the blurb slightly as it contained more detail than I felt was needed.)

That’s not to say it’s not enthralling. I love Twig, she’s quietly optimistic, even while dealing with the myriad of little hurts her lifestyle has inflicted on her. She deserves the friendship she dances around, and the irresistible apple pies. Some of the other incidental characters particularly amused me, librarians with tea obsessions, people who like owls.

I like owls. But not as much as the people in this story.

This is a really difficult book to talk about without spoiling!

If you’re wanting to read a modern fairy tale, but more disney than Grimm (think Brave perhaps) this is going to be right up your street. It was absolutely perfect for me for an evening, and I will look forward to reading it with Smallest in a year or two, I can see her very much enjoying it too.