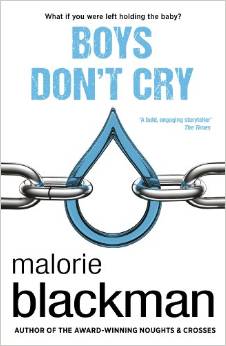 Despite Malorie Blackman’s reputation, I’ve somehow come this far without reading any of her work. I finally put that right this week, when one of Big’s friends lent me Boys don’t cry, and I read it in one sitting. (Who needs sleep anyway?)

You’re waiting for the postman – he’s bringing your A level results. University, a career as a journalist – a glittering future lies ahead. But when the doorbell rings it’s your old girlfriend; and she’s carrying a baby. Your baby.

You’re happy to look after it, just for an hour or two. But then she doesn’t come back – and your future suddenly looks very different.

Malorie’s dramatic new novel will take you on a journey from tears to laughter and back again.

As I’ve written before in my review of Non Pratt’s Trouble teenage pregnancy has a particular resonance for me. And I’ve often wondered about the male point of view, and how different behaviour would be if the boys ever thought they might be the ones doing the child care. But then again, when teenagers are drunk at parties, childcare isn’t high on anyone’s priority list.

Maybe if a few more people read books like this, it would be 😉

From the first moment that Dante lays eyes on his baby, he desperately wants it to be someone else’s problem. Because raising a child on your own is a problem. He quickly finds out how hard it is – mentally, emotionally, and financially. That part of the book is well drawn. There isn’t as much focus as I would like on developing the relationship between Dante and his baby, or even really getting to know Dante, because there are a couple of other layers of story going on. This is a family with a lot of complications – as usual I’m trying to stay away from spoilers. For me it felt overloaded – and dealt with on a slightly superficial level, because of how much is being crammed in.

There’s a huge amount going on in this book. I read it very quickly, and feel like maybe I didn’t do it justice in that, perhaps it’s one that needs a bit more exploring. I certainly feel that I’m going to look out some of her other books now. And I’m going to recommend this one, particularly to any and all teenagers I know. It is good to read the other side of the story as it were.

(I’m already losing track of how many books this year. How bad is that? I think this was my third though. Joining in with read 52 or your own personal challenge? Let me know in the comments.)