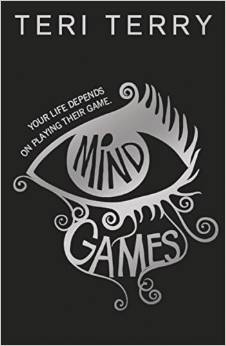 On the day I found out I’d been longlisted in the UKYA blogger awards it seems only appropriate to review a forthcoming UKYA title. (And run back through my archives making sure ones I’ve reviewed before are tagged 😉

The blurb for Mind Games:

In a future world, life is tightly controlled by the all-powerful PareCo. Standing out from the crowd is dangerous so misfit Luna hides her secrets carefully, not realising her own power. Unlike her friends and family, Luna has never been able to plug into Realtime, PareCo’s virtual world, where almost everyone now lives their lives. So how do PareCo know about Luna, and why do they want her for their elite think tank?

The truth is hidden in a web of shining silver secrets, and the corrupt authorities would do anything to keep it that way. Can Luna find a way to use her own hidden powers and bring the truth to light before it’s too late?

This blurb gives the book rather more of a sinister and dystopian feel than I felt the book started with. The strength of Teri Terry’s writing is in the characterisation I think, (along with the ripping yarn thing she’s got going 😉 ) and Luna is just great. As a Refuser of the technology you need to access virtual worlds mentioned above, she’s excluded from pretty much every activity going on with her peers, but she doesn’t come across as isolated somehow, she’s very complete in herself. As ever, I prefer to avoid spoilers in reviews, but I don’t think I’m giving away too much to say that this is likely to appeal particularly to gamers and coders.

There are twists and turns and conspiracies galore, and Luna will need every bit of the strength of character refusing has given her to find her way through it. If you’re anything like me, you’re going to want to clear a block of time for this book – I really didn’t want to put it down, and carted it about with me on trains and to swimclub. And while I don’t *really* have anything against trilogies or series, it is good to get the whole story in one shot once in a while.

I was surprised to discovering a teaser for Teri Terry’s next book at the end of the ARC though. Here’s hoping that means it’s coming very soon 🙂

Highly recommended for anyone who enjoys SF/dystopia, and don’t forget to take a look at Slated, Fractured, Shattered if you haven’t already read them. Eg here Teri Terry on Amazon

is currently on offer at 99p on Kindle)