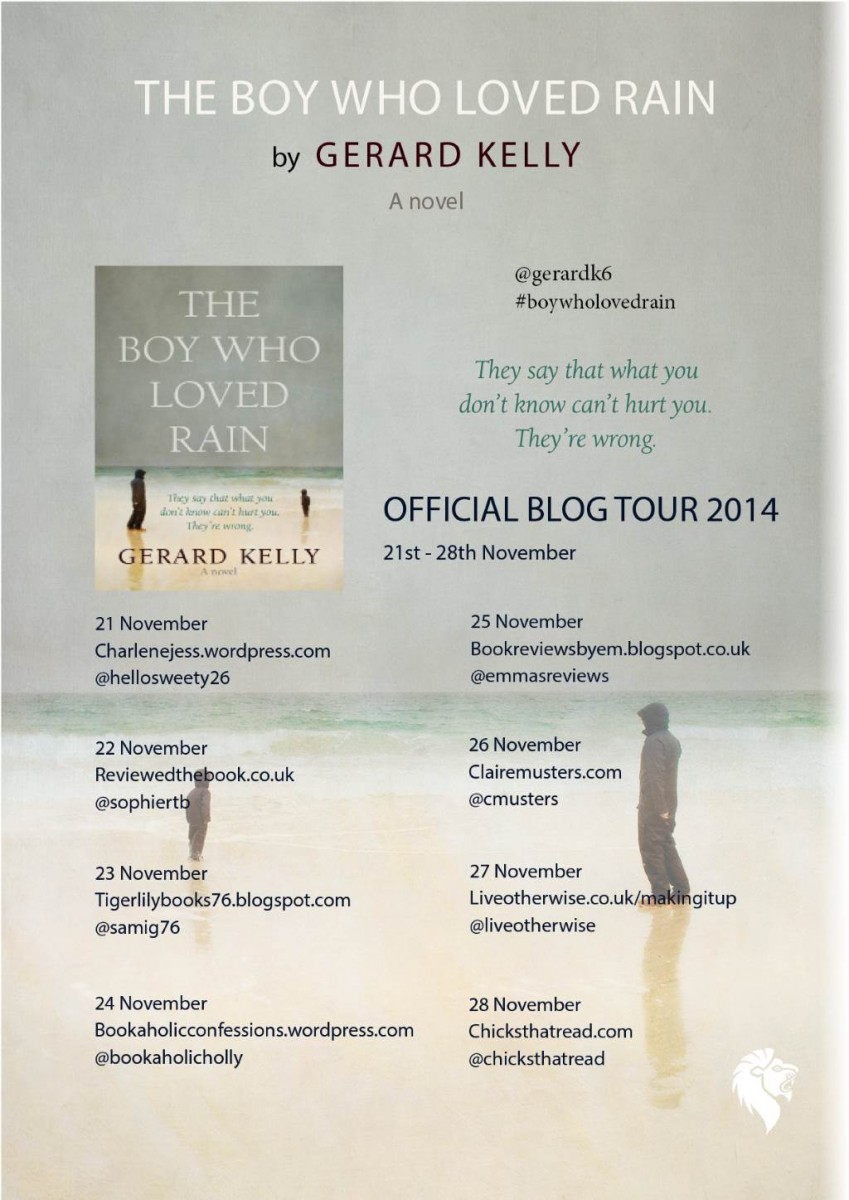 I wasn’t sure quite what to expect from this book. The tagline reads They Say That What You Don’t Know Can’t Hurt You. They’re Wrong. and the blurb

The anger runs deep; from some untraceable darkness; and it is stealing his will to live. Colom had the perfect childhood, the much-loved only son of a church pastor. Yet he wakes screaming from dreams in which his sister is drowning and he can’t save her. Fiona turns to her husband, desperate to help their son. But David will not acknowledge that help is needed – and certainly not help from beyond the church. Then they find the suicide pledge. Fiona, in panic, takes Colom and flees…but when will she acknowledge that the unnamed demons Colom faces might be of her and David’s own creation? This beautifully written and searching novel by poet Gerard Kelly explores the toxicity of secrets, the nature of healing, and the ever-present power of rain.

For me, the beginning was stilted. It was as if the author took a little while to find the focus for the story, which isn’t the relationship between Fiona and David. Or the church. So the start stutters along, not quite scene setting (in fact the physical descriptions of scenes really did get in the way) until the situation becomes critical, and suddenly, we’ve got a story.

The relationship between Fiona and Colom. Her friendship with Miriam. Miriam herself, and the wonderful location in Portivy in Breton. (I want to go there.) This is the story, and it’s hypnotic and immersive. It flows like the tide in ebbs and surges, and is just as temperamental as the sea.

Sorry, got carried away there a little. But once I got into the main body of the book, I really did feel caught up in it. And I love the rain quotes and descriptions between the chapters. Once or twice it did feel that story was being heaped on story almost for the sake of it, but Colom’s character carried it for me, I wanted to know why, and how, and whether he would survive.

No spoilers, because I never do spoilers, but I was satisfied with the ending, although I had begun to suspect where we were going. It still worked for me, and if you want a puzzle of a book, a personal mystery, rather than a thriller, this may very well work for you. It’s not an edge of your seat drama, but it is a need to find out, and the secondary characters (other than David, who felt like a bit of a stand in almost, a character sketch who was never completely filled in) are quite wonderful.

Disclosure – book was provided free of charge for the purposes of review via Netgalley.