Recently we were offered the chance to review a new monthly subscription service from Teen Parcel. It’s for monthlies 😉

We call them periods here, and we’re very open about the whole thing. Which meant that when Big got to that stage, we’d already had lots of conversations about what was available, how it all works, what’s going to happen and so on. This parcel is a lovely way to bring up those discussions – it would be a nice thing if they had one that you could order in beforehand, that then had a code for a subscription maybe.

The parcel itself is pink. Very pink. I’m not a big fan of pink, but this is nicely done. It does come in a discreet grey mailing bag, so you aren’t clearly announcing to the world what is going on, good for the teenager who isn’t feeling she wants to skywrite it. What’s inside is separated up into sections. There are different versions of the parcel on the site, either towels or tampons. Personally, I don’t think this recognises how teenagers in particular manage their periods, I think the majority use a mix of products, and I’d like to see that reflected. So for example, a girl who mainly prefers towels will have to use something else if she swims, and someone using tampons might well backup with towels overnight. (Surely that’s not just me?)

The one we were sent was tampons. There’s a cloth back with 5 in ‘for now’ then two boxes of 10 each for later. (I was expected one of these to be tampons and one towels to be honest.) The little box ‘for you’ was the bit I was wondering about. It had a bracelet, some sweets, a chocolate flake tea bag, nail varnish and various Clean&Clear spot treatments. With the first box coming in at £5.95, this seems like fairly good value, subsequent ones are £9.95, and I would think it will depend very much what’s in that ‘for you’ as to how good value it continues to be. 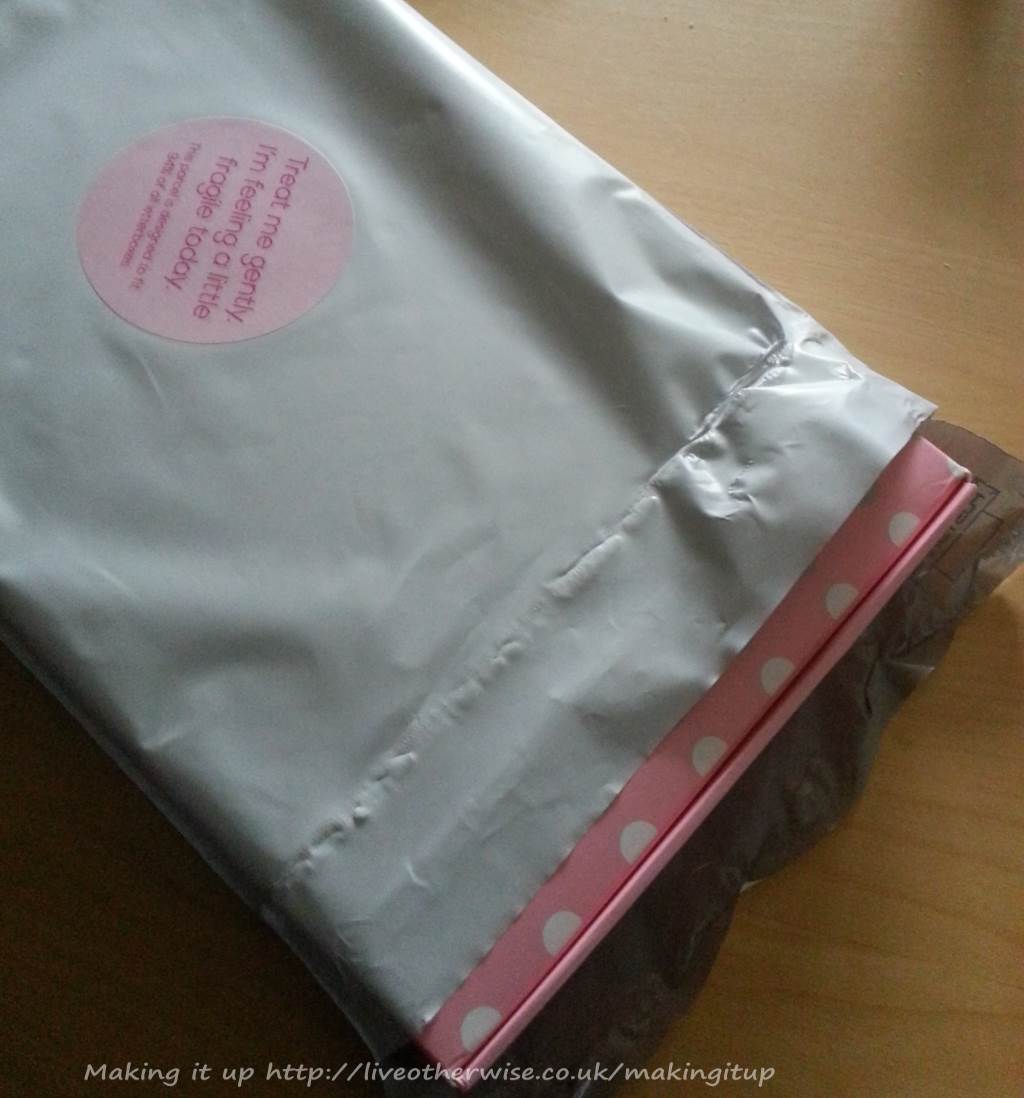 You set up your details on the Pink Parcel site including dates and durations, meaning the parcel gets sent out to arrive a few days before Aunt Flo (gosh I used to hate that) drops by. Which would also serve as a handy reminder 😉

All in all, both Big and I were quite impressed with the box, with the caveats above about mixed products. The site itself could do with a bit of an overhaul colour wise – it looks lovely, with white and pink and greys matching the box, but is very difficult to read. (I’ll be passing that feedback along.)

There’s also a grown up box, as it were, so well worth exploring even if you’re past the teen years.

For a girl just coming up to her periods, I think this would be a great way to get a stock of bits in, although like I say, it would be nice to be able to buy the first box for just in case, and put the subscription on hold until really needed. All in all, a good service.

There’s a twitter party about the service, with prizes, hosted by tots100 in just over an hour’s time at 8pm. More information here and don’t forget to use #amonthlything to join in. You’ll need to follow @tots100 and @teenparcel.

Disclosure: I have been recompensed for my time compiling this review.