So, this weekend was Blogfest no 3, and again I was going along to provide a techie voice. This time it was a single roundtable session, rather than the clinic, and while I have loved the clinics (the challenge of helping someone right there on the spot for just 10 minutes really fires me up actually!) it was great to be able to go to more of the sessions.

The day kicked off with an introduction from Justine, and then the panel on Technology – how does it change the way we think. 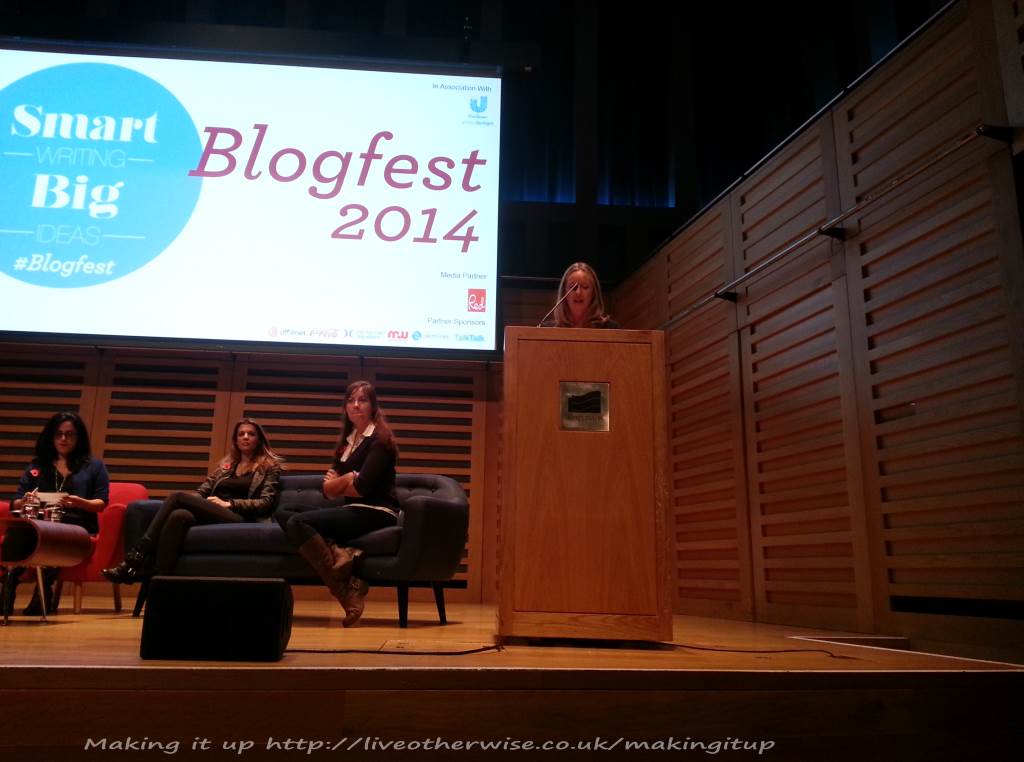 First panel: How does technology shape the way we think? (She typed into a phone. ) #blogfest

Rather than taking notes, I tweeted, fully intending to use them to build my posts afterwards 🙂

It has to be said that I was at a bit of a loss with this panel. They come from a very different place to me – I don’t read the papers, or watch TV for my news stories – I read twitter, follow links, get commentary there and then. And I’m very aware of how each paper has its own agenda. I do get very annoyed with the term digital natives, and people who go on about our children being so much more savvy than we are.

Several times people made the point that our children won’t ever know a world without the instant connection, the internet, the always on of social media. (Unless everything goes very horribly wrong of course…) This doesn’t mean that they are necessarily more aware of it or how to use it than we are though. I frequently comment about the time my nephew came to visit, and couldn’t find the internet on our desktop, purely because we used a different browser to the one he used at the school. It then turned out he didn’t know what a browser was. (What *do* they teach them in schools these days?)

So no, he’s not really a digital native is he?

Certainly most of the panel members weren’t. One of them said something about social media not being real. My response?

People on panel not au fait with twitter. It's not real? I'm sitting next to @ChildLedChaos who I met online. It's real. #blogfest

I did then get a teensy bit distracted by some of the technology on offer. Ooh, recursion.

First swearword of the panel from 10.01 was @fleetstreetfox I think? And no, I’m not going to share it 😉

Then there was the standard – social media gives us all an equal voice. Um, no. We might all be able to say things, but not everyone is heard, and even those who are heard aren’t always listened to.

Hmm. People might have an equal voice, but not everyone has equal volume. Some are more easily amplified. #blogfest

And then the topic changed to keeping our children safe online. And I’m not quite sure who it was was promoting locking down the internet/ social media so that children can’t get online, but I don’t think much of that idea.

Best way for our children to learn about the Internet is to keep them off it? Please. Apply that to rest of world, it's nonsense #blogfest

Our children live in a different world to the one we grew up in. That's true for every generation. Work with them not against them #blogfest

Older people have a 'Before the internet' identity, children haven't. How can we as parents prepare them for this? #blogfest

Kids and tech. It is what it is and we need to work with it. I sometimes have best conversations with 12yo over social media. #blogfest

And my top tip for keeping your children safe online?

Best way to protect your kids online is to know them. Build strong relationships with them in person. Talk to them. Trust them. #blogfest

I wasn’t very impressed with the panel members recommending cybertracking apps, and leaning over their children’s shoulders at all times. That doesn’t seem to me to be very respectful of their children’s privacy or autonomy.

Really worth pointing out to children though, the point made by an audience member with a speciality in forensic IT (I think – does anyone know what it was?) there isn’t really a delete option on the internet. Once it’s published, there’s a record somewhere. So actually, not just the children, think twice yourself too.

Really worried that the panel don't understand that delete doesn't mean it doesn't exist anymore. It's still there. #blogfest

And then the panel finished before I lost my rag over the quick advert for coding in schools as introduced by Michael Gove. (Scream.)

All in all, it was an excellent discussion to kick off the day, but I would have liked to see someone a bit less traditional media and a bit more digital up there to give the other side of the story. It was a teeny bit like people discussing a country they’ve only visited on holiday and don’t quite approve of.

Oh, and if you can’t build real connections online, I’d like to know where these four children came from 😉 (Tim and I met on an email list in the days before social networks 😉 )

So it turns out that I can only fit one panel into a post. More to follow during the week, including Think Bombs, Making money from your blog, and of course, Techie tips and tricks.