I was lucky enough recently to win a signed copy of Mars Evacuees by Sophia McDougall. It’s not just signed though, it’s doodled in. Isn’t this just fab? 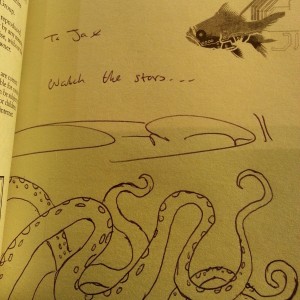 The fact that someone had decided I’d be safer on Mars, where you could still only SORT OF breathe the air and SORT OF not get sunburned to death, was a sign that the war with the aliens was not going fantastically well.

When Alice Dare finds out that she’s being evacuated to Mars to join the youth defence force, she isn’t sure what to expect. But it sure wasn’t being shot at, chased by invisible aliens, befriending a robot goldfish – and then having to save the galaxy!

I wasn’t sure quite what to expect before I actually got my hands on this one. It turned out to be a great SF adventure – there’s an alien invasion on the go, and a batch of children are shipped off to Mars to be fast tracked through an academy to join the defense forces. You might be thinking Ender’s Game – don’t. This is more adventure yarn in an SF setting, although there was a moment when I thought we were going Lord of the Flies, and I surprised myself by feeling a bit upset with it. Stick with it through the rough parts though, and you’ve got all sorts of fun things coming up to do with working past surface perceptions *and* working as a team. It turns out your allies can be found in the most unexpected of places.

I think this is described as middle grade (I’m not really up on my age categorisations I’m afraid) which just means a bit younger than Young Adult. I can see it going down well with children around Small’s age (currently 11) and upwards. I thought it was well written, good fun, and I’ll certainly be looking out for more from this author.

What have you been reading? Feel free to link up and let me know.