I have read previous Mhairi McFarlane books. I thought I’d reviewed at least one, You had me at Hello, but if I have, I can’t find it right now. Oops.

So, we’re firmly in romantic self discovery territory here. The blurb:

Delia Moss isn’t quite sure where she went wrong.

When she proposed and discovered her boyfriend was sleeping with someone else – she thought it was her fault.

When she realised life would never be the same again – she thought it was her fault.

From Newcastle to London and back again, with dodgy jobs, eccentric bosses and annoyingly handsome journalists thrown in, Delia must find out where her old self went – and if she can ever get her back. 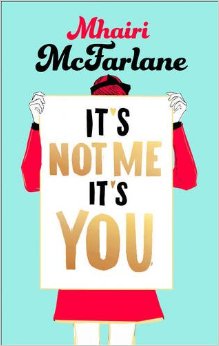 Pre order It’s Not Me, It’s You

at Amazon (where you can download a sample to kindle)

I rather like Delia. A talented artist who doesn’t have the courage to show anyone her art, she’s sprinting headlong into middle age, not noticing that her prospective fiance has drifted off along a different path. So she ups sticks and heads for the big smoke, to try to work out who she is and what she wants, and it’s all so very much more complicated than she ever dreamed possible.

I’m not going to spoil the plot, I don’t do that sort of thing. Overall, I loved this travel of self discovery along a romantic rollercoaster. There were one or two bits that didn’t quite feel like they fitted the character, and some slang that I’m obviously too old or unhip to understand (I resorted to asking twitter, obviously!) but overall I was rooting for Delia and her bloke.

I was quite surprised by the emotional twists and turns, and particularly by how I was feeling near the end (curiously flat) but I persevered, and it was very much worth it.

Not world changing, but some good life advice in there despite that, and a very pleasant way to spend an evening.