I think I was reading dystopian fiction before it was called that. I remember reading The Chrysalids (kindle)

at school, and wishing I would suddenly discover that I was telepathic. (And the first seeds of thoughts about the rights and wrongs of judging appearances and differences were sown. ) 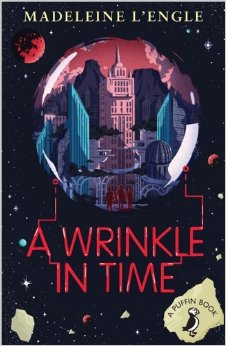 There was A Wrinkle in Time

, leant to me me by my cousin-by-choice (the family wasn’t really related to us, but they were still uncle Brian and aunty Mary and how I wept when he died of cancer in my teens). First totalitarian conformist society. (I loaned this to Small at Kentwell and he loved it. Tim’s just read it, so when Big reads it too, we can have a family bookclub meeting. Bonus!)

, which was in a George Orwell compendium I chose for a form prize in third year secondary.

and wondered why the women of our world have never come together like that to assert their position. Anyone?

Oh, they came think and fast at university. The Gate to Women’s Country

and other Sheri S Tepper books. The Handmaid’s Tale

, something I recommend all parents read, to realise the fragility and vulnerability of their children. It’s free online (caveat. I’m not sure why that’s free online. It’s been there a long time, and it’s linked from wikipedia but just in case it shouldn’t be there, I’m not going to link to it).

Oh, and Ender’s game. Which is a book I’ve recommended *so* many times.

I don’t know when I first encountered The Wave

. We’ve watched it as well. The terrifying thing about that one is it isn’t fiction. Other non fiction eye openers are things like Dumbing Us Down: The Hidden Curriculum of Compulsory Schooling

. Written by an award winning teacher no less.

Perhaps it’s just alternative brain washing. Starhawk’s books give me a little hope. I’m watching the progress they’re making towards a film of the fifth sacred thing and hoping so hard.

Then there was little brother (previously reviewed). You can read that free online too. Or even buy the entire book as a poster. And now there are dystopians everywhere you turn. I’ve watched Gattaca. Read and watched Hunger Games and Divergent. Oh, and Ender’s Game should be in there somewhere.

I like the Slated trilogy. And ACID. The Matched trilogy. Which I’ve never reviewed. And I’ve just read The Giver.

Is it any wonder I look at our society with a jaundiced eye. We have multiple mainstream parties with interchangeable policies and leaders. (*don’t tell me that labour will drop austerity and protect the vulnerable. I just don’t believe you. And as for their authoritarian bent! ) We have a mainstream media that dances to the tune of the political gentry and a population managed with divide and conquer strategies.

There are some alternative ideas out there, like the basic income, but it’s so hard to get anyone to consider it seriously.

Dystopia? I’m beginning to wonder why I bother reading it at all.

(If I’ve missed any must read titles out, do feel free to leave them in the comments. Will add links to free online books tomorrow when I’m at a keyboard instead of swiping on a phone. )

Realised I left out Station eleven! Although it doesn’t feel like the often bleak dystopians listed above, perhaps that’s why.

Disclosure: vast majority of book links above are to Amazon. Other book stores are available, and probably morally preferable, but tend to have fairly dire shopping and affiliate interfaces. If you’d rather shop at Hive, here’s a banner link instead 🙂