So, I’ve been reading How to build social competence through LEGO®-based clubs for children with autism and related conditions (Daniel B. LeGoff, Gina Gómez de la Cuesta, GW Krauss and Simon Baron-Cohen) for a little while now.

The premise is basically that if you have a structured environment and activity, you can use it to develop social skills. I was interested in whether you could transfer the learning points to something other than LEGO® (minecraft or a programming activity for example) but the book isn’t particularly forthcoming on that, being very tied up on evidence bases and so on. 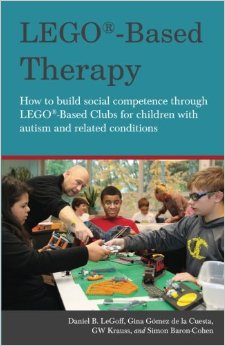 at Amazon (kindle or paperback)

In itself, this is a book for professionals, those running group therapies, working with multiple children. There’s lots of discussion about whether including non autistic children in the groups is worthwhile, and lots of debate as to why LEGO® works so well.

This all seems to me to be missing the point slightly. Basically, if any of us, autistic or not, find a group where we have common interests and goals, we are far more likely to have increased social interaction. If you never meet anyone you like, you aren’t really strongly motivated to chat, and work out how to get along with people, are you?

Through the whole book, I was struck by the single minded attitudes of the professionals quoted. Eg

Labeling of otherwise inappropriate social behaviour as ‘disrespectful’, ‘rude’, ‘inappropriate’ or ‘impolite’ is a waste of time and creates a potentially pejorative and negative social environment. This is never helpful. Focusing on positive social communication is vital. Commenting on positive social interaction so that the other group members notice and can identify those actions which elicit positive attention and praise is much more effective. Saying which behaviour you want, rather than telling participants what not to do, is very important.

No, really? Have these people never come across the ‘don’t think of the elephant’ experiment? (Go on, try it. Tell someone not to think about elephants and then ask them what they’re thinking about. We only hear the thing, not the ‘don’t’. So if you’re parenting, try to change from saying ‘Don’t run’ to your child, to ‘walk’. It works better.)

Also, as I said this book is aimed squarely at professionals. So “The identification and diagnosis of potential participants should necessarily be undertaken by qualified mental health or neurodevelopmental specialists.” Thus letting out charities or parents from trying to apply the principles described. This seems rather a shame to me, there are many charity groups with high levels of expertise who I’m sure could facilitate this type of group as they are already running group activities for children who would benefit. And parents are often expert in their own children, and that expertise should not be discounted. I’m spotting a bit of gate keeping and empire building basically, and that makes me concerned.

There are also some strands in the teaching of social skills that I’m finding quite uncomfortable. So for example

Potentially stigmatizing repetitive actions, such as thumb-sucking, hair-twirling, nose-picking, hand-flapping, repetitive speech mannerisms or vocalizations, can be addressed in individual therapy, and then prompted or reminded with an agreed-upon cue or gesture during subsequent group sessions. This cueing or prompting of corrective actions is also often usefully shared with peers, who might prompt an appropriate alternative gesture (eg thumb under chin, forefinger at mouth rather than thumb in mouth; fists pumped in excitement as opposed to hand-flapping). Again, these should be arranged and implemented only by qualified therapy staff.

Now, to the best of my knowledge I’ve never flapped my hands. I’ve no doubt if I had it would have been encouraged out of me. The things I do – chewing the inside of my lips, twiddling hair bands, fiddling with yarn, are all low key and overtly acceptable. I’m still left confused – why is fist pumping acceptable, and hand flapping not?

Is this book describing a therapy that’s supposed to develop social skills useful to the participants, or improve adherence to social norms so that the rest of society feels more comfortable? There’s really very little physical difference between flapping your hands and pumping your fist, so the acceptance of one is down to a wider social tolerance, and that to me is wrong.

I’m very aware that there are social skills that many autistic children and people are lacking. But when therapies cross into normalisation instead of skill building, I’m seeing all sorts of red flags. Advice including: “therapists unfamiliar with current trends in verbal and nonverbal greetings among different age groups should try to observe some typical age peers engaged in greetings, for example at school, a sporting event, or other social gathering.” makes me wonder, who are we teaching the social skills to here? The ability to match your activity appropriately to the group at large is the skill required, not acquiring one specific set of greeting behaviours. I think the authors of this book are beginning to miss the point slightly.

There are some positive points here – it’s definitely an interesting read. But I think the things I took away from it aren’t necessarily what the authors intended. I’m definitely rethinking my ideas about a minecraft group – I probably will still do it, but the aim will be to get children interested in minecraft together to have fun. It’s almost impossible that they won’t learn some stuff from that interaction, and it may well be that some social guidance will be required, but as it will be a parent supported group, that will be down to the parents to encourage observence of the limited set of group rules that will be set up cooperatively before the group starts. We won’t be letting any qualified experts get stuck in, that’s for sure.

And hand flapping will very much be allowed. While adult directed activity to determine who is cool, will not.