Unlike my normal posts, this is not spoiler free. So if you’ve not yet seen the Doctor Who episode The dark side of the moon with Peter Capaldi and you want to without knowing the story, I suggest you click away now. 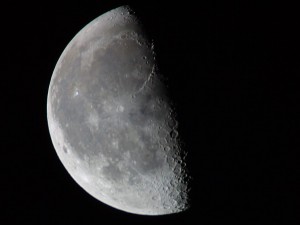 Image is from public domain images

It has been mentioned before that I’m not good with change. I was good with Christopher Eccleston, although I’d have liked to see more of him. But hey, David Tennant! (I’m a massive David Tennant fan, all the way back to Takin’ Over The Asylum

.) So that was good. And actually, boy was it good. And I didn’t want him to go.

Other bloggers would probably insert a gif here. I have more self restraint.

Then, Matt Smith. Not me. Too young. Inexperienced. But enthusiastic, and he grew into the role, and towards the end, I almost enjoyed it. I’d nearly got used to him. And then he changed again.

I do not understand all the liking of Peter Capaldi. He appears, mainly, to be famous for swearing a lot. It’s not a particularly enviable skill, I can swear a lot if I want to. I don’t much, these days, because I don’t want to be bringing up the Williams kid see A Night At The Met

) but it doesn’t really impress me.

And the Doctor Peter Capaldi style really isn’t doing it for me. There’s all the running around after a companion. Um, no. There’s the petulant nastiness. Again, no. There’s the shouting. Shut up? Really? *that’s* what you’ve got for us?

But last night, on the moon. Where to start.

Well, first of all, it did spark off an excellent discussion about gravity. And some musings on how the moon could have a greater gravitational pull without apparently having increased in size. We all winced at the idea of very large mono cellular creatures (surely under increased gravity *if* they’d managed to grow in the first place, they’d have just gone splat? Although, single celled creatures with jointed legs??) but hey, they were scary, so let’s cruise past.

But then, the whole egg thing?

Did you know that eggs get lighter as they incubate? Yup. Now obviously all the resources I found on searching for this were related to people hatching eggs at home, but it stands to reason. The whole point of the egg is to protect the thing inside while it develops, so it’s a barrier. It stops things getting in, it stops things getting out (and if things were going to get in, where were they getting in from? The egg was in space after all. Kind of emptiness all around), there certainly won’t be an increase in weight.

(Let’s not go down the whole weight/mass discussion at this point, I’m fairly sure the discussion in the show was related to weight.)

So basically, the entire premise of the episode was complete gobbledegook. And then the newly hatched baby proceeded to lay an egg bigger than itself, which is another neat trick on quite a few different levels. (No mating? and the whole size thing?)

Peter Capaldi doesn’t stand a chance to develop as the doctor (not that I think he has it in him to be honest) while he’s being handed scripts like that one. Please. A tiny bit of of thought? Even if it has been excellent for prompting all sorts of home education investigations, I can manage that without the doctor. Honest.

(I could rant much further about all of this, but I’ve gone on quite enough I suspect. Although I have just been reminded on twitter about how suddenly the TARDIS arrives exactly where and when required. Every time. What’s that about?)

(Oh, and why isn’t he looking for Gallifrey?)