One of the many strengths of Montessori is its focus on practical activities, introduced using real tools appropriate to the task at hand. If you’ve small children you’ve no doubt encountered their fascination with scissors – the Montessori approach is to demonstrate how to handle and carry them safely.

It’s very easy to do in fact. Take strips of paper, around 1 to 2 centimetres width. Hold up a strip of paper in the hand without the scissors. Hold the scissors appropriately in your other hand, and demonstrate opening and closing them. Then start to cut small pieces off the strip of paper.

You will rapidly find that you have a child competent with using scissors, and a large pile of small pieces of paper 😉 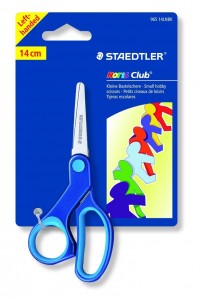 We do this over a tray, and then the paper can be tipped straight into the recycling. I’d also recommend using paper for recycling to make your strips with – quite satisfying chopping up junk mail! Another good tip is to have good scissors – and awful lot of scissors sold for children’s use are very poor and don’t cut well. I popped into our local small stationery shop (and had a nice chat with the assistant cub leader who runs it) and picked up Staedtler Noris club small left handed scissors

for Tigerboy. Conveniently the two pairs have different coloured handles so they are easily told apart, although when I tested them, I found I can cut left or right handed with either pair.

Smallest was utterly thrilled. Being left handed isn’t a huge deal for her, but the cheap scissors we already had didn’t work well for her, these were absolutely great. Like I say, big pile of bits of paper, happy child. Tigerboy obviously needed *very* close supervision, but physically he’s just as capable as Smallest, and whatever she wants to do, he wants to do, so I was happy to let him have a go. Unlike a traditional Montessori classroom though, I won’t be leaving these out for him to get his hands on at any time 😉

Picture to be added tomorrow. If you’re interested in our Montessori activities, check out the previous posts.