Not the parenting *of* spoons. Not quite. 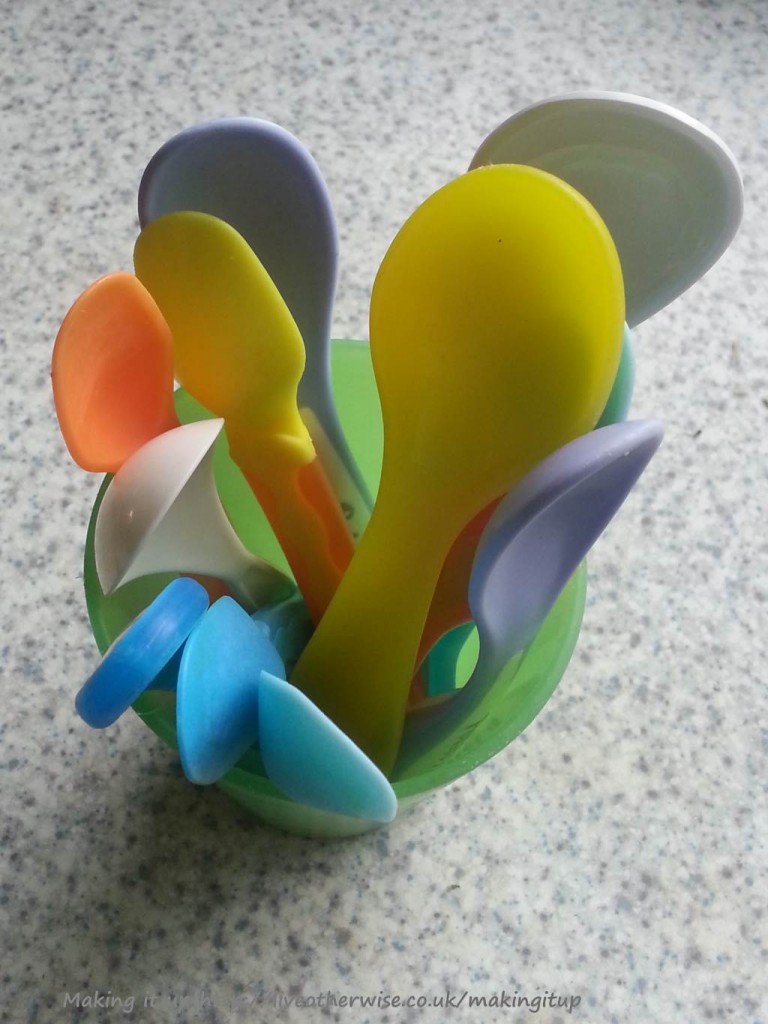 No, this is about the resources we all have. Anyone with chronic illness or disability has probably come across The Spoon Theory (If you haven’t, go read it. I’ll wait.)

Are we all caught up?

And I’m going to hazard a guess that parenting when your executive function isn’t your strongest feature is just that little bit harder. (Yes, I’m talking about Aspergers again. I’m probably going to do that a fair bit from now on I’m afraid. At least until I understand a little better where it fits in me.) Basically, you have limited parenting spoons.

No, that doesn’t mean that my kids are neglected. They’re dressed (mostly, unless Tigerboy has stripped again). But the socks might not match. They’re fed, regularly. It’s even home cooked. (Again, mostly.) It might not be served at the time I planned, but it will be served. And over the course of a week, what’s offered will be fairly balanced. (What they eat is a whole other story. Sigh.)

They’re even home educated. Because I did obsessively research children’s learning styles, read widely, and drew conclusions long before I had children. (And it was particularly lovely when I had children to discover it really did suit them the way I thought it might.) And I might collect and hoard resources, particularly books, read constantly and support the development of education around interests (so if a child wants to submerse in minecraft, I can get with that. Although I also know that hauling them up from the depths for a change of pace every now and then can be a good thing.) so we’re mainly child led. Sort of led. You probably know what I mean.

No, it’s not the children that are neglected. And it’s not me either. I’m far too fond of food (chocolate!) to waste away, although I might regularly forget breakfast. For me, the housework suffers. There’s an occasional extreme blitz, but daily hoovering? Um, no. (Not least because the noise of the hoover is almost physically painful. So yes, I do brush the hall floor with a handbrush.) Paperwork is a nightmare. Which reminds me, must pay the council tax. Could someone remind me again at the end of the post? (Working memory of a goldfish.) Tax returns? Hollow laughter. The stress level. Aargh. (I may need tea to deal with the panicky feeling that is setting in just talking about it.)

Before I had children I was more organised. All bills were paid on time. I was punctual to work, where the amount of work I could achieve in a day was legendary. (Systems development was my dream job. Once the system was assimilated, by total immersion in code and documentation, I knew it rather better than the back of my hand. I rather miss computer programming, in my little supportive team, who understood coffee needs, and requirements for silence without interruption while working.)

Ah, interruptions. Here comes another one in the form of Tigerboy. He’s bringing me toys, which is lovely, but there goes my train of thought. What was I saying? And what was the point?

The point was to highlight the challenges of parenting with aspergers. (Not the challenges of parenting aspergers, that’s a whole different post, that I might get round to one day.) To work through some things about me and my life in the way that works best for me. And to ask for tips. Do you have any sure fire strategies for getting through your day without putting your clothes on inside out? Is a wall planner the answer? (Although what I really want is one of those big screen walls they have in the NCIS: LA ops room, where you can grab ideas of the screen and slide them around until everything fits. How cool? I might actually know which was was up with one of those. Worth a try, don’t you think?)

Note: there are helpful things on executive function, and parenting in Cynthia Kim’s book, Nerdy, Shy and Socially Inappropriate which you can find reviewed here, and buy at JKP books.or kindle UK