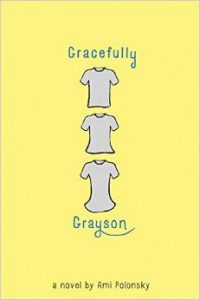 I’m not sharing the blurb for this book, beyond the question above, because it’s a bit of a spoiler to say the least. Grayson is a lonely boy. He lives with his aunt, uncle and cousins, after his parents died in a car accident when he was young. He doesn’t feel like he fits in, and each day, mentally, he turns his clothes into girl’s clothes in the mirror, and tries to hold on to that memory all day.

It’s getting harder and harder for him to do that, and he’s increasingly isolated. The story unfolds simply and indeed, gracefully, exploring what it might mean to just not match up externally with how you feel inside. With the interests you have, with the people you want to be with. Grayson is shown to us gently, as he stretches his boundaries by auditioning for the first time ever for the school play, and for a very unexpected part. What his classmates, teachers and stand in parents do in response to all of this tells us more about each of them than it does about Grayson.

Not that we aren’t learning about Grayson, who is learning about himself, his past, and possibly, his future. Most of the focus is on appearance rather than identity, but there’s more exploration of deeper ideas towards the end.

The book reminded me of Wonder in some ways – school based, diverse characters, good guys and bad. It’s more tightly focussed and less moralistic than Wonder though, and I suspect, more approachable. I do intend to hand it to the two older children to read so that we can have a family book group discussion of it, as I think that first of all, it’s really good to read, and secondly, there’s a lot to learn from it. When that’s happened, I’ll feed back again.

Have I given you enough, but not too much? No over the top spoilers, but enough teasers? This is a book to read with an open mind and then think about for a while afterwards. And if you do, when you can as it’s not out for a little while yet, let me know how it goes?

If you’d like to link up what you’ve been reading, please feel free. And if you want a badge, there’s one on the Read52 page.