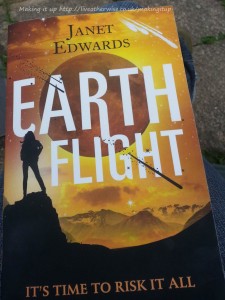 So obviously, what I did yesterday, was sit in the garden and read a book.

I’ve already read and reviewed Earth Girl and Earth Star by Janet Edwards, so I was desperate to get my hands on book 3 in the trilogy.

Now, how to discuss a trilogy without spoilers for anyone who hasn’t indulged yet?

This is classic adventure SF, with a teenage focus. The first book focusses closely on Jarra, the Earth Girl of the title, setting her in the centre of a conflict between the Handicapped (humans who can survive only on a largely abandoned and destroyed Earth) and norms who are spreading out to colonise the Galaxy. Earth Star widens out to bring in politics, a wider cast and a first contact with Aliens scenario, that Jarra powers her way through. Earth Flight lifts up again, and feels packed to the rafters with details on the politics, science, culture and that ever widening cast. There’s Jarra herself, her family, her friends, the military, the various governments. There’s the first contact situation, but there’s also a growing movement to do something about the upstart earth girl and the problematic planet she inhabits.

The plot rackets along at an ever increasing pace – if I have a criticism, it’s that I’d really like to see the whole thing slow down and incorporate more characterisation, more side details. Some of the cast just don’t get their chance in the limelight, and that seems rather a shame. There is just so much to cover though that I can see why it didn’t happen, and if you do want more exploration, there are short stories going up free on the author’s website at the moment, that really do flesh out the characters by bringing in back story, different cultures and so on.

This is an incredibly rich environment and while we might have had most of Jarra’s story now, I hope that we’re going to see much more in the setting. It reminds me of the Vor novels from Lois McMaster Bujold in the breadth of backgrounds, cultures and politics that are being drawn in, although there is a feeling that we’re skating over the surface rather. I’m sure there’s much more to come from this author, and if you’re an SF fan, you really can’t go wrong with getting stuck into this trilogy. And at least if you buy now, you’re not going to be waiting for answers in the way I have been 😉