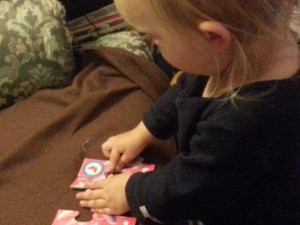 Earlier this week it was Tigerboy’s two year assessment. The local health visitor service had sent out a horribly American (diapers??) questionnaire for me to complete and take back, and I’d followed him around for a couple of days, looking for evidence of wearing boxes as hats, jumping with both feet and kicking balls. The speech questions were easy to fill in. He doesn’t. Next?

So, we went to the children’s centre for the assessment. It’s a fabulous place for a toddler – there’s toys all over the place, and they also had chicks in an incubator, which he thought was fabulous. I meant to take both the little two back to see them again, but ran out of time 🙁

Once in the assessment room, he bumbled around exploring *everything*. He particularly liked the home corner, but the trains were fascinating too, and then he spotted one of those rugs with a town drawn out on it, and he was in heaven driving cars and trains around the roads. The health visitor went through the questionnaire, grumbling a little about some of the questions (yes, diapers) and discussing others with me – stairs? We live in a bungalow. Ah right – and watching him as he played. He demonstrated both his intelligence and inquisitiveness several times as we chatted – loved when he found a baby doll, and came through and took the big soft doll off the weigh scales and put the baby on instead. He also demonstrated the lack of verbal development, Mmm MMMing his way through the session. Although he does now also have an incredibly cute Ohhh of disappointment, which is massively communicative.

So we discussed the options for support. Despite everyone knowing how important early intervention can be, it’s nearly impossible to get it – but we’ll be added to the speech therapy waiting list. What they do have, though, is a supported communication group, in the centre, with a very small number of children, and three staff. There’s some play time and some led activities, and I stay, so we’re getting a referral to give that a go. Obviously it’s on a Wednesday, like everything else *sigh*, but we can only try it and see. While I hesitate to compare him to Small too often, if there are any similarities, speech could just appear in about 6 months time, and we’ll never know why.

And then, the best part of the session (and the bit that I’m calling an Amazing Achievement). As I was going around clearing away all the toys he’d got out, he found a tin on a shelf, and emptied it onto the floor. I thought it was a jigsaw, and turned the pieces over for him, but instead it was several pictures of things beginning with the same letter, and then a lower case and an upper case letter. I held the lower case one out to him – and he said “d!”

That gave the health visitor pause for thought. I don’t think she’d ever met a non verbal two year old that can read 😉 He’s absorbing it from the reading things I’m doing with Smallest, and I do wonder if that might be the way to go, forget speech and just teach him to read and type. Then he could text us….