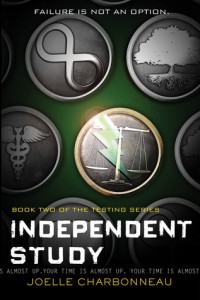 is the second in The Testing series by Joelle Charbonneau. I reviewed the Testing last summer, and said at the time I thought that some of the comparisons with the Hunger Games were a little overplayed and a bit harsh.

Do I still feel that way?

This is a different set of books. Cia is a very different lead character, and in some regards I prefer her to Katniss, who is a bit on the cold side at times. However Cia lacks self awareness in some ways, it seems implausible after everything she’s been through so far that she can still be going around pretending to herself that she isn’t the cleverest person on the planet. And the clues as to this are coming thick and fast now, with everyone else having noticed it.

I found that a bit of a strain to be honest. Other than that, the political machinations are becoming more apparent, *and* more entangled. It would be nice, I suppose, for one of these dystopian series to not end up quite so tangled? And the deaths are coming thick and fast, and somehow quite casually. It’s nowhere near as gruesome or graphic as some of the other YA dystopian I’ve read, but I’m not sure that necessarily excuses the mounting body count.

Do I recommend this? Yes. Though it feels to me that this book is a little weaker than the first. The good news though is that there isn’t all that long to wait for the series finale, which is out in the summer. Much better than having to wait a year for the next one.

If I had to give it a score out of 5, I think I’d be going 3. Slightly strained in places, but engaging lead character and enough going on for me to want to read on. And no, I’m not going to go back and add in scores on all my previously read books.

If you’ve read it, let me know what you think? This is my ninth read this year, so I’m well on track for my Read52 target.