We’ve had a Leapfrog Leaptop for longer than we’ve had a Tigerboy I think, I think we bought it for Smallest for her birthday or Christmas before he was born. She plays with it every now and then, pretending to write emails, or more often making it make music, but mostly it sits around being ignored. (Laptops are so last year you know, we’re on tablets now darling 😉 )

And then recently I noticed that Tigerboy had started playing with it. Except it doesn’t really look like playing somehow, it’s much more business like. He pushes the same buttons repeatedly. He likes O (O says o for octopus!), and X (Ox). He quite enjoys the noises setting, but what he goes back to time and time again are listening to the letter sounds. I *thought* I’d heard him mimic them a couple of times, but tonight it was unmistakable.

My little silent boy isn’t bothering with babble or words. He’s learning sounds, one letter at a time, using the Leapfrog toy laptop.

‘O’ he said, forming his lips into a circle, and pointing at the screen. ‘O’. And ‘sssss’ and ‘mmmmmm’. He didn’t want to let anyone else push the keys and choose his sounds, wouldn’t try any sounds other than the ones he’d figured out already, but he was ever so pleased to be showing off the ones he has cracked. ‘b’ came next which he was very happy with, ‘w’ and ‘v’. With each new sound he learnt, he became more and more excited and proud of himself, possibly reinforced by the round of applause he was getting for each one 😉

The other day I got a pile of photocopied resources sheets through the post instead of a SALT letter or referral. They suggested a wide variety of activities I could try with him, to encourage his speech. Quite a few things are things I do regularly – short sentences, single word choices, saying the thing while I sign it. I give him plenty of space to speak, make sure I spend time with him one on one, read with him, talk about books, draw, do all sorts of things. And any of the activities I tried off the sheets actually upset him, he knew I was trying to get him to speak, and he didn’t appreciate it.

For whatever reason, Tigerboy is verbally shy. But technology seems to be encouraging him to talk, where games, books, puppets and conversation have failed so far. (Yes, I know he’s not quite 2. I know that he’s within average boundaries.) So I think I’ll follow his lead and see where it takes us. Tim says he’s obviously going to bypass talking completely and just take up texting us, and right at the moment I wouldn’t put it past him. 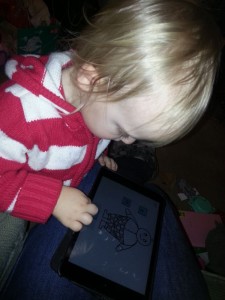 That was him before dinner, with the iPad mini (thank you Netmums!) and a Bob books app. He had it cracked very very quickly although there was a moment of panic when he got to level 3 and it didn’t have the letters in the words to drag the tiles on to. Made me realise he was doing most of the matching visually, but he quickly figured out how to do it without any hints. He’s a bright lad. If he wants to come up with his own method of learning to talk, I’m sure it’ll work out fine in the long run.

Now, where did we put that Leaptop? Somehow I think I’m going to want it front and centre for a while, as he learns the whole alphabet 🙂