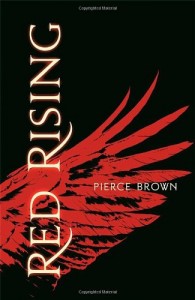 Darrow is a Helldiver, one of a thousand men and women who live in the vast caves beneath the surface of Mars, generations of people who spend their lives toiling to mine the precious elements that will allow the planet to be terraformed. Just knowing that, one day, people will be able to walk the surface of the planet is enough to justify their sacrifice. The Earth is dying, and Darrow and his people are the only hope humanity has left.

Until the day Darrow learns that it is all a lie. That Mars has been habitable – and inhabited – for generations, by a class of people calling themselves the Golds. A class of people who look down at Darrow and his fellows as slave labour, to be exploited and worked to death without a second thought.

Until the day Darrow, with the help of a mysterious group of rebels, disguises himself as a Gold and infiltrates their command school, intent on taking down his oppressors from the inside.

But the command school is a battlefield – and Darrow isn’t the only student with an agenda.

Ender’s Game meets The Hunger Games in this, the first in an extraordinary trilogy from an incredible new voice.

I do wish marketers didn’t feel the need to get a reference to those two books into every new dystopian book description.

At the same time, with Red Rising

, it’s easy to see why those two particular parallels are chosen. Darrow, undercover as a Gold, passes the tests to the Academy. And within the doors, the situation deteriorates rapidly – survival of the fittest, political machinations, murder and mayhem rank high on the techniques for social advancement in the highest class – and if Darrow is going to survive and what’s more, beat the rest, he’s going to have to be just as murderous as everyone else.

For me, the parts before the Academy, the depiction of the life of the Reds below the surface of Mars, the frequent excursions into Darrow’s own thought processes are what kept me reading this, despite the gore and violence. There’s plenty of gore and violence if that’s what floats your boat, but there’s also lots of interesting political development, and the psychology of a system that oppresses people without a second thought, because that’s all that they’re good for, is utterly fascinating.

As ever, it’s interesting to read dystopians, and look up at the world around you. It’s not too far a stretch to say that playing people against each other to hold them in their place is a technique successfully employed by every ruling class through history and the present, although I wonder to what extent other people actually recognise that.

While overall I enjoyed Red Rising, I did have some problems with the pacing. I’m not *quite* sure why there is such a fashion for trilogies at the moment, and it seemed to me that there was a long drawn out part of this book that felt just like gory padding. I’m hoping for less interpersonal killing and a bit more of the political development that I thought was so fascinating as the trilogy develops.

Definitely one to watch. Oh, and unlike recent dystopians, strong male lead – I daresay someone is already planning a film. Not so much scope for romance though it feels, which is part of the draw for many readers of both Hunger games and Divergent trilogy I suspect. There seems to be more consideration of the political situation from Darrow himself, which is a different perspective to how I remember the main slants of HG and Divergent. That could of course be just my memory – would be interested to hear from anyone else who has read them all.

Disclosure: I received an e proof of this book for review via Netgalley. Book link above is an affiliate link to Hive, support your independent bookshop and this reviewer 😉 Red Rising available now.