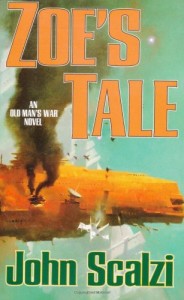 is interesting, as it runs alongside The Last Colony, telling most of the same events but from a very different point of view, that of the 16 year old daughter of the main characters in the other book. It’s also, I would say, YA rather than adult SF. (And by adult I just mean not YA or children’s, rather than adult – nudge nudge, wink wink.) I also think it’s the best book of the four. You’re in the story, there’s no remoteness, Zoe is a great narrator, and you feel her feelings. And yes, that did mean I wept copiously, twice. A good weep isn’t all bad, right?

If you get emotional, I’d say this book is going to tug at your heart strings. She’s 16. There’s a bit of a boyfriend thing going on. They’re also at risk on a lonely colony that around 412 alien species want to destroy, give or take, so there’s some danger. There’s politics, and friendly aliens as well, and it’s great classic SF as well as being a really good yarn.

I really highly recommend it – although I’d say reading them the way I did, so starting with Old Man’s war and working through chronologically is the way to go. And if you do, I’d love to hear about it.

It’s been a good reading week here. As well as Zoe’s Tale, I’ve finished Trouble, read Perry Angel’s suitcase (a children’s book that I think I was sent for review a while back, but I’ll pop on Shingle Street rather than here) and of course read lots of picture books.

Why not tell me how you’ve been doing? (Feel free to grab the badge.)