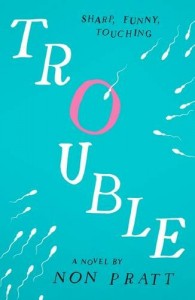 This is the story of a couple of teenagers and a pregnancy. Except the two teenagers aren’t the couple, if you see what I mean. In fact, you’re kept guessing for quite some time as to who the bloke is, there are a couple of contenders.

Which all sounds a bit stereotyped. And it really isn’t.

It’s a difficult read for me in some ways. My youngest sister was only a few months older than Hannah when she had her first child. I’ve been part of a family agonising over the right decisions to make. Granted I wasn’t on site, as I’m the eldest and had finished university by this point, but I tried to be there for her.

I am massively grateful that Facebook didn’t exist back then. The potential for broadcasting bullying is just too extreme, and how this plays out in Trouble should be enough to give any parent pause for thought. Talk to your teens, folks, make sure you really are part of their lives.

I’ll be interested to read what my teen thinks of it all when she gets her review up. As a mother daughter co read it might seem like an odd choice but if it sparks discussion, a really good idea.

I’ve only done justice to one of the main characters so far, and the second, Aaron, I find a little more difficult to identify with. He is going through his own crisis which is portrayed sensitively throughout, never straying into mawkishness. The dialog is sharp, and I love the contrast of narration of the same events from two very different points of view.

I think those moments of humour go a long way to lighten what could be a tragedy in the wrong hands, but this is a strong story, deftly told. I’ll be keeping an eye on this author.