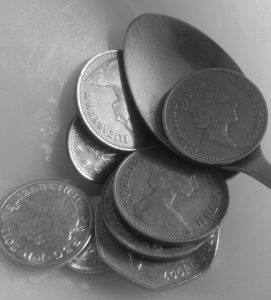 If you follow me on twitter, you may have caught me sharing posts about Basic income over the last couple of days. Most notably a petition to the European Union which closes today. The petition is to investigate basic income, not to actual start it, but it’s the first step, and one that I increasingly think needs taking. It’s an idea I’ve been exploring for a little while, as an alternative to things like minimum wages or living wage. Sounds a bit ridiculous doesn’t it, just giving *everyone*, regardless of their financial situation, enough money to live on. And surely we can’t afford it?

But I’m beginning to think what we can’t afford is going on the way we are.

Austerity appears to mean pushing money at banks and rich people (quantitative easing and tax cuts) while cutting benefits for people with next to nothing. (Bedroom tax. Benefits sanctions. Welfare.) And each pound cut from those with little actually means less money going into the economy as people cut back on food. Heating. You know, luxuries like that.

What would it look like instead if we put money into the system from the ground up? Can you imagine it? What would you do if you had an income of £10,000 a year?

It’s not a lot, is it, £10,000. It wouldn’t be luxurious living. But you could get by on it. You could study. Start that business you’ve already dreamed about. Work hours that fitted around the children if you wanted or needed to work for a top up. And you wouldn’t have to accept just any old job, so I think employers would suddenly find that they’d have to make working for them a bit more attractive and respect their employees.

Wouldn’t the system fall apart though, if people didn’t need to work?

Here’s the thing. When pilots have been done on this kind of system, people do still work. People like working. They like being busy, feeling important, achieving something. And they like extra money 😉 Yes, some people stop working, or cut down their hours, but that might mean that the people who want to work can find jobs, and the people who don’t don’t have to do the whole benefits rigmarole that costs a fortune to implement anyway.

And what’s more, educational outcomes are improved. (Teenagers aren’t out scrabbling for jobs to help support their family – school attendance rates are improved.) Crime levels drop, health levels improve. (Which means lower costs for emergency systems and so on – it’s convoluted working out how this all interacts, but I think the overall is positive.) There have been a number of trials around the world of various sections of this system, and they are, as far as I can tell, positive.

One of the things that I think would make a huge difference, is that women could be far more independent even while having children. You would be able to stay home with your baby if you wanted to. Or work flexibly. I think the implications are immense – although I haven’t been able to find any articles focussed on this aspect.

What I do find though, is articles discussing the moral aspects of the system. Shouldn’t work pay? Isn’t it better to be gainfully employed – a striver, not a skiver? Our coalition government and media is full of this kind of assertion, and it seems to me that it isn’t based on anything other than fear and control. Money is given away all over the place already, and we don’t know where half of it is going. Let’s be up front about it, accept that all people deserve to live in dignity and explore what basic income could do for society. It’s got to be worth a try.

Read on to find out if the basic income could actually save us money.