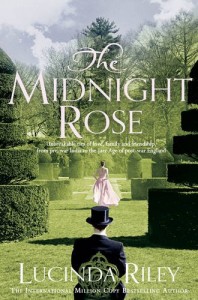 You know when you’re reading a book and it’s late at night, and you know you ought to go to sleep, but just a few more pages because you just need to know…and then suddenly it’s 3 am, you’ve finished the book and your head is too full of exotic places and distant times to drift off to sleep immediately? It can’t be just me. In this instance, if I’d had the paperback in my hand I probably would have put it down, knowing how much of the book I had left to read. (It’s 652 pages. That’s a lot of book.) But I was reading it on Kindle, and so I just kept on reading.

This book, The Midnight Rose

, is hypnotic. Stories of a childhood in India over a hundred years ago, entwined with a modern tale of romance and mystery as an American film star takes part in a shoot in a grand house in Dartmoor. How is the past linked with the present? There are so many different strands to it – different characters’ words are brought in via memoirs and diary entries and where it should be disjointed, it isn’t.

So much happens, spread across the different life times. You’re finding out the story of Anahita, and her son, who she was told died when he was three. She never believed it, and tasked her great grandson with finding out the truth. Years after her death he starts to investigate. And so the tangled stories are gradually untangled, while the web is woven around the reader.

Enthralling. Mesmerising. Pictures of India from a century ago, with palaces and royal courts, princes riding on elephants, and women living in purdah. A modern world with a film star struggling to work out how to balance her needs for privacy with the media chasing her for stories. It’s an ambitious undertaking, spanning the globe and so much history, but controlled deftly, with only a slight slip for me, towards the end. Echoes of Jane Eyre perhaps, that are a little over heavy? I’d love to hear your opinion if you read it.

I’m also pleased to say that due to a hiccup with the despatches, I ended up with two copies. Meaning I’m going to be very generous, and give one away on release date – Wed 16th January, so do check back for that.

So, I’m a tiny bit behind my Read 52 target, but I’m confident I’ll catch up quickly – I’m 33% through my next read already. How are you doing? Pop your posts in the linky or let me know in the comments, and feel free to grab the badge.