At least I was. I loved so many things about it. I adored the connective typing, the predictive text, the way that I only had to send a phrase a couple of times and it learnt it. I used to be able to send my snail mail address in 10 taps of the keyboard. Do you have any idea how much time things like that saved?

Since the android 4.3 upgrade though, it’s just not been like that. My phone forgot where we live. Not a problem, I thought, it’ll pick it up again quickly. So I tried, patiently typing in my entire address repeatedly. But not only has it not learnt the phrases, it’s refusing to relearn individual names or words. Whenever I try to swype Jax, it fills in Hac. It’s a stranger to me 🙁

Apps aren’t working either. Photoshop express looks like it is doing fine, right up until the point that I save the image I’ve painstakingly cropped. Then it saves something else entirely. Which gave me some good comments on my last Silent Sunday I’ll admit, but still isn’t quite what I was looking for.

My browser frequently doesn’t load the link I’ve clicked through on. It sits there stubbornly displaying the short link. So I go back, and click through again, and this time it loads 75% of the page before hanging obstinately and ignoring my attempts to refresh. 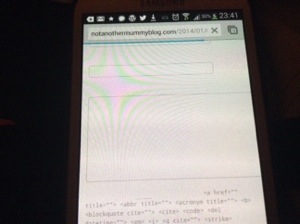 The GPS went haywire and added 0.25k on to my last run. Which did give me a really good time for the first split, but rather throws out the whole point of using a GPS enabled app in the first place.

And the camera. For some reason it keeps taking multi shots instead of the single picture I’m aiming for. Opening the gallery to view the shots takes so long that several times I’ve forgotten what I was trying to do and gone off to make a cup of tea instead. Not always a bad thing (I like tea) but does make sharing pictures to social media a little more challenging.

Small tales of woe in comparison with the twitter user I found who was left with a Note 2 that no longer connects to wifi. She rooted it and installed a different version of the OS in the end, without the Samsung overlay. Or the other one who has to carry a charger with her at all times as the battery life is suddenly unpredictable. And do Samsung have any response to this? Their twitter bot advised me to factory reset the phone and sent me a link to the S4 instructions. Helpful. Not. Factory reset? What about all my apps? All my data? Do a backup with Kies they advised the next day (it’s not a very speedy bot sadly).

I’m not impressed. I held off on installing the upgrade just in case when I was away from home, but you only get postponement options that I saw, no option to just decline. So eventually I accepted it, and the tool that allowed me to be more efficient, more effective online and therefore off, was reduced to a pale shadow of its former self, forgetting my name.

I managed to reset some things that had changed, turned off the irritating clicky keyboard, took out all the images that were suddenly littering my gmail inboxes. I do resent when upgrades change basic settings like that. What I resent even more is when they upgrade your expensive tool and break it.

Later today I’m going to try to make time to do a full backup and then a factory reset and see whether that fixes it. But even if it does, I’ve had a costly lesson reinforced. Samsung may make beautiful kit, but they don’t care about the people who use it. Not enough to offer any real support. If I manage to get this phone sorted out so that I can make it through the rest of the contract, I’ll remember that. And go back to either Nokia or HTC, who value their users and connect with their communities online.

Have you had any problems with your smartphone following OS upgrade? Tell me all about it. I really do want to know.