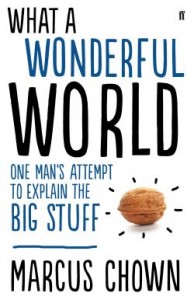 I’m really happy to be hosting a leg of the blog tour for Marcus Chown’s new book, What a Wonderful World. I’ve got a Q&A AND a giveaway, so read on to find out more.

Me: Hi Marcus. Where do you start writing a book like this (I’m guessing there had to be a plan)?

Well, you’d think there should be a plan, wouldn’t you? Even I thought there should be a plan. But, actually, there wasn’t – or not much of one. The book came about because my editor, Neil Belton, said: “Why don’t you use your skill at explaining physics to anyone, to explain everything to everyone – how the world works.” I was daunted. How would anyone write about everything? Over the space of a year or so, when I tried to put Neil off, I wrote several outlines and ripped them all up.

In the meantime, I did an App called Solar System for iPad. I had to write about 120 stories about different moons and asteroids and planets in only 9 weeks. So I had no choice but simply to do it and, while I was writing, think about what I should be writing next. It must have worked because the App won several awards (though I can’t take all the credit since it was a team effort! Thanks to Faber & Faber, Planetary Visions and Touchpress).

So that’s what I decided to do with this book: jump in and hope everything would come out in the end. The only plan I had was to first of all do the hard stuff I knew nothing about – money, sex,respiration, the brain, and so on. If I could do that, I thought, the book might begin to take shape, and I’d have the stuff I’m more familiar with to finish with. Miraculously, the book did begin to take shape.

Jax: If there was one topic in the book that you had to specialise in, what would it be?

Marcus: I became fascinated by the history of civilisation and what drove agriculture, the ascent of cities, and so on. With numerous interglacials like the current one over the past million years of ice age, why did things begin to take off for us 13,000 years ago and not in the previous warm period between 130,000 and 115,000 years ago? Nobody knows.

I had never realised that the design of stone hand axes did not change for 1.4 million years. Palaeoanthropologists call it the “1.4 million years of boredom”. We are used to this year’s iPhone being different from even the one from two years ago but, for 60,000 generations, nobody improved the design of stone hand axes. This brings home how amazingly different the past 13,000 years have been from the past millions of years of human evolution.

Jax: This book covers an awful lot of knowledge, presumably some was acquired through formal education. What were you like at school – teacher’s pet or rebel without a cause?

Marcus: I am a journalist so a lot of what is in my book I acquired by simply phoning experts – economists, biologists, historians – and picking their brains! But, yes, some of the stuff I did acquire at university.

But I am always wrestling with the things I learnt, trying to really get my head around them. And to me, as a visual person, that means creating pictures in my head to substitute for the mathematics I learnt at university. I find I really understand something only if I can explain it to someone sitting next to me on a number 25 bus (or perhaps I should say someone unfortunate enough to be sitting next to me on a number 25 bus!). It’s my good fortune that the way I understand things overlaps with communicating those things to other people.

But, as for what, I was like at school, I wasn’t a teacher’s pet and I was about the least rebellious person you could imagine. Quiet and rule-abiding and boring, I would say. I used to spend ages doing things like drawing the planets to scale. I was that dull. Hopefully, I’ve improved since then!

Jax: Hm, that doesn’t seem that dull to me 😉 If you had one piece of advice for a ten year old in today’s world, what would it be?

Do the thing you like doing in life because you’ll be better at it than anything else. When I was at school I was told do something that leads to a specific job. The trouble is I liked astronomy. But my dad said: do the thing you like. So I did. And he was right. I have made a living as a science writer, which was not on my careers’ teacher’s menu.

Also, it’s more important to be a good person than a clever person.

I really enjoyed your questions. Thanks for hosting a leg of my blog tour. Best wishes, Marcus

Well, I thought that was rather good. The book is excellent too – but not something I’ve managed to devour at a single sitting 😉 I have dipped in and out, having my appetite whetted tonight, for example, by the section on capitalism. There’s a massive bibliography that I think if going to provide lots of extra reading for me, and I very much enjoy interacting with Marcus on twitter. This is a book that I am looking forward to introducing it to the children, I think it will be massively educational for them. And fun too.

Even better than just getting to read the questions I asked, you can get your hands on the book itself. I’ve three copies to giveaway, and as always, it’s an easy comment entry. Just tell me what makes the world wonderful to you.

UK only, get your entries in by Sat 12th October, and I’ll be passing winner’s details to the publisher for fulfilment, so if you don’t want your details passed on, don’t enter. As always, you can get extra entries by tweeting, sharing or by liking my facebook page or subscribing to my email (over there at the right) but you *must* leave an extra comment per method of entry for it to count, I use a plugin (And the winner is) that runs off comments.

There are lots of other stops on the blog tour, and you can find them all here.

9th October Keeper of the Snails